Women’s hockey edged out by Elmira 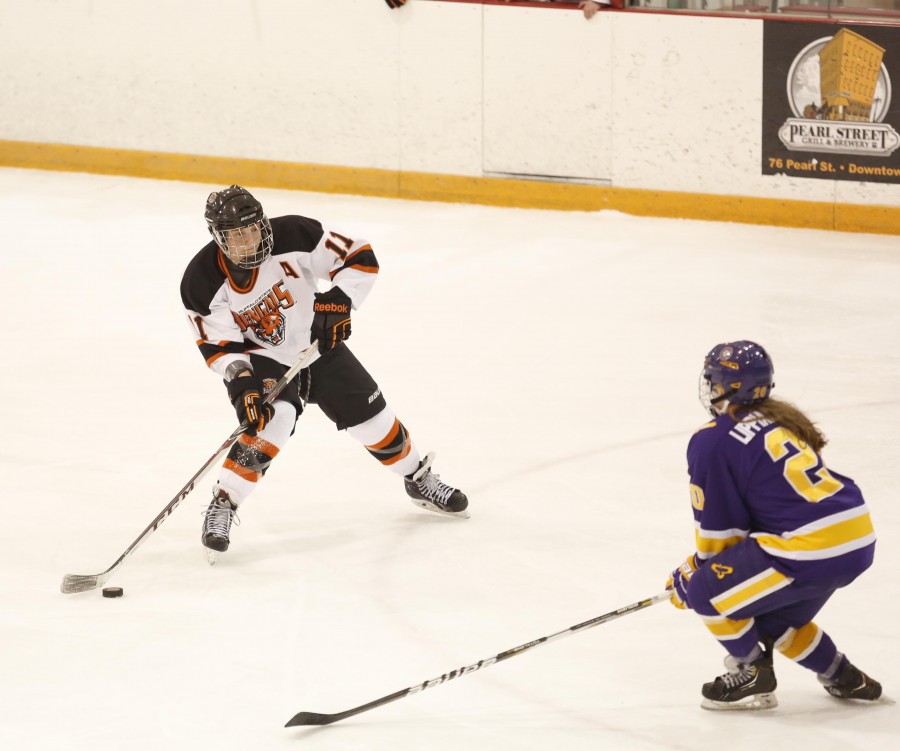 unior defenseman Nikki Kirchberger carries the puck into the zone against Elmira.

The Buffalo State Women’s hockey team hung step-for-step with No. 1 Elmira in a 2-1 contest on Friday. Coming into the weekend with a 9-8-2 record, the Bengals found themselves in the thick of the ECAC playoff hunt.

“We use every test as a gauge of how our team is performing and obviously we want to be peaking at the right times in the season,” said assistant coach Lucy Schoedel. “So, heading into the playoffs in a couple weeks, it’s a huge test and we know we can hang with any team, so that’s important for the girls and for us to know.”

The momentum shifted back and forth throughout the contest. The Soaring Eagles scored early on and it looked as though the game would be business as usual for a team that has only lost one game in regulation all season. The tone of the game was set on a different course when Buffalo State killed off three straight Elmira power plays, two of which were 5-on-3 opportunities. Buffalo State nearly tied the game on a point blank shot from Kara Goodwin right in front of goal, but it was snagged by the glove of Elmira goaltender Kyle Nelson.

“We knew going into the weekend that it would be one of the tougher weekends of the year,” Goodwin said. “I believe we all kept that in the back of our minds and just played as hard as possible, treating it as any other game, and I thought we did awesome. It was one of our better team performances and we had a great first game of the weekend which is usually a struggle for us.”

The score was leveled on a deflection from senior forward Jeyna Minnick early in the third period, tying the score at one. The Eagles thought they had taken the lead with seven minutes to play, but the goal was waved off because the puck had been kicked in. New life was given to the Bengals and they pressed hard for a winning goal, but Elmira would stun the Bengals with a late third-period goal. Brooke Wilgosh gave the Eagles a 2-1 advantage with three minutes to play, and they held on for the win.

“Performance wise, I feel the first game was awesome,” Minnick said. “We played a full 60-minute game of hockey as a team and that’s always great. As a team we never gave up and really gave it our all.”

The team is encouraged rather than disappointed by the contested loss.

“It was a great opportunity to gauge where we are, as Elmira is currently the number one team in the nation,” said freshman goaltender Justine Silva.

Unfortunately for the Bengals, they had to travel to Elmira the next night as a part of a home-and-home series, and the Bengals left Elmira with a 5-0 loss. Despite the final tally, the game was closer than it appears on paper. After two periods, the score was only 2-0, but Elmira blew the game wide-open in the third, scoring three goals.

Buffalo State took pride in the fact that they stood toe-to toe-with the Soaring Eagles.

“Our team played very well this weekend,” Silva said. “We came together as a team and skated with them, battled hard, showed heart and gave the number one team in the nation a run for their money.”

The Bengals feel good about their chances in the playoffs.

“Going into the playoffs, every game will be a battle,” Silva said. “We need to make sure we do not give teams such as Elmira any chance in our defensive zone, and we have to put the puck in the back of the net when given the opportunity. We need to remember how we played as a team and continue to do that as we finish up the season and contend for a playoff spot.”

Now, the Bengals find themselves late in the season with a 9-10-2 record, good for fifth place in the ECAC and the team is feeling good about themselves. No matter what happens this year, this season will be a great improvement over the 3-21-2 record they posted last year. Their success speaks volumes about the job head coach Candice Moxley has done in the two years she has been with the program.

“Last season, we were cleaning up a lot from the years before, but Coach did a great job recruiting and bringing in stronger players as well as giving a whole new outlook on the women’s program,” Minnick said.

Schoedel feels the players themselves have a lot to do with the success also, and that the coaches have only played a minor part.

“I think it’s just the way the girls carry themselves on the ice. It’s really the culture and the identity of our program has changed entirely,” Schoedel said. “I think it’s all been a great change and looking at the numbers it shows on paper, but it also shows in the morale of the team. I think they’re happier. The returning players; our vets seem pretty happy. It’s important to us.”

The Bengals have four games remaining this season. They travel to conference rival Cortland for back-to-back meetings this weekend.