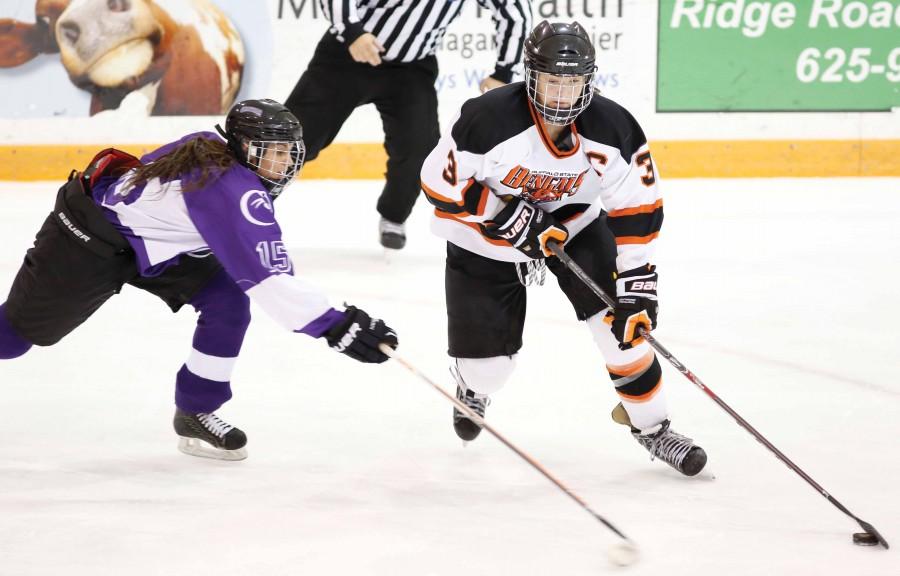 Kara Goodwin leads the Bengals with 20 goals this season.

The Buffalo State women’s hockey team compiled a 4-1 record in the first five games back on the ice after being off for more than a month for winter break. They were feeling good after the five-game stretch and were ready for a big weekend series versus their ECAC West rival, the Oswego State Lakers. The Bengals would ultimately lose both games, a 3-2 loss on Friday night and an 8-1 loss on Saturday afternoon.

Coming into the weekend, the Bengals had a 7-3 conference record and sat in fourth place, while the Lakers were 7-3-1 and one spot ahead. The weekend series had a big impact on the playoff lives of both teams.

On Friday night, the Bengals got off to a fast start, taking a 1-0 lead three minutes into the game on a goal from freshman forward Caitie Horvatits. The Bengals would then get into penalty trouble, and the Lakers would take advantage. Sophomore defenseman Alli Ullrich scored on a 5-on-3 power play to even the game at one midway through the first period.

The Bengals seemed determined to make a comeback. Freshman forward Christine Harris got the Bengals on the board early in the third period. The Bengals would record 16 shots on goal in the final period, but their comeback would ultimately fall short.

Junior defender Nikki Kirchberger felt the game was there for the taking.

“We had a little hiccup, then we got back to playing our kind of hockey,” Kirchberger said. “It unfortunately didn’t sway in our direction, but we ruled the game and controlled the flow for most of the game.”

The Bengals then faced a quick turnaround as they headed into a Saturday afternoon matchup with the Lakers, with a chance to salvage the weekend series.

The Lakers jumped out of the gate, taking a 4-0 lead at the end of the first period. They would add another goal early in the second period to extend their lead to five, before Kirchberger was able to finally put the Bengals on the board.

That would be all the Bengals could muster though, and the Lakers would tack on three more goals to come out victorious, 8-1.

The weekend series was hard to make sense of for senior forward Jeyna Minnick.

“In the first game, I feel like we were nervous and timid,” Minnick said. “In the second game I don’t really know what happened, we kind of just fell apart. I think we did play well together, but we just couldn’t come to it in the end.”

Head coach Candice Moxley seemed to have the answer for why the Bengals struggled, though.

“We take chunks of time off during periods where it turns around and it bites us,” Moxley said. “You can’t do that against good teams and strong teams, because they’ll capitalize and take full advantage every single time and that’s what happened with us versus Oswego.

“The first night, we kind of dug ourselves a little bit of a hole, but we fought back, we battled and showed the competitiveness that we needed to be in that game and make it close. The second night, it was a very different story. We were showing all efforts and playing really well in the offensive zone but again we kind of checked out a little bit in the defensive zone.”

Although they were two rough losses, Coach Moxley loved the efforts she saw from Horvatits and freshman forward Erin Gehen.

“We had very consistent and strong efforts from Gehen — she was just a workhorse out there — and Horvatits,” Moxley said. “Those two, they brought it both games, they were tenacious all over pucks, they were taking away pucks, and I think we get everybody else on the same page and we can do some damage.”

The Lakers finished the weekend 5 for 8 on the power play while the Bengals were 0 for 8. Freshman goalie Justine Silva had a combined 52 saves over the weekend. Kirchberger finished with a goal and an assist.

Despite the rough weekend that didn’t help their playoff chances, the Bengals were not about to hang their heads.

“We still have a shot at playoffs,” Kirchberger said. “We have more conference games that we need to make sure that we come in full blown Bengal hockey ready to go.”

Moxley’s confidence in her team isn’t diminished despite the losses, but is eager to get back to work on Monday to fix the mistakes.

“I think everybody in the locker room knows we have it in this team to do great things,” Moxley said. “It’s just a matter of finding it. It’s a matter of getting back to work on Monday and making ourselves better every single day.”

The Bengals have six games remaining, all ECAC West matchups. They will take on Elmira in a home-and-home series this coming weekend.