Football flourishes in best season in over a decade 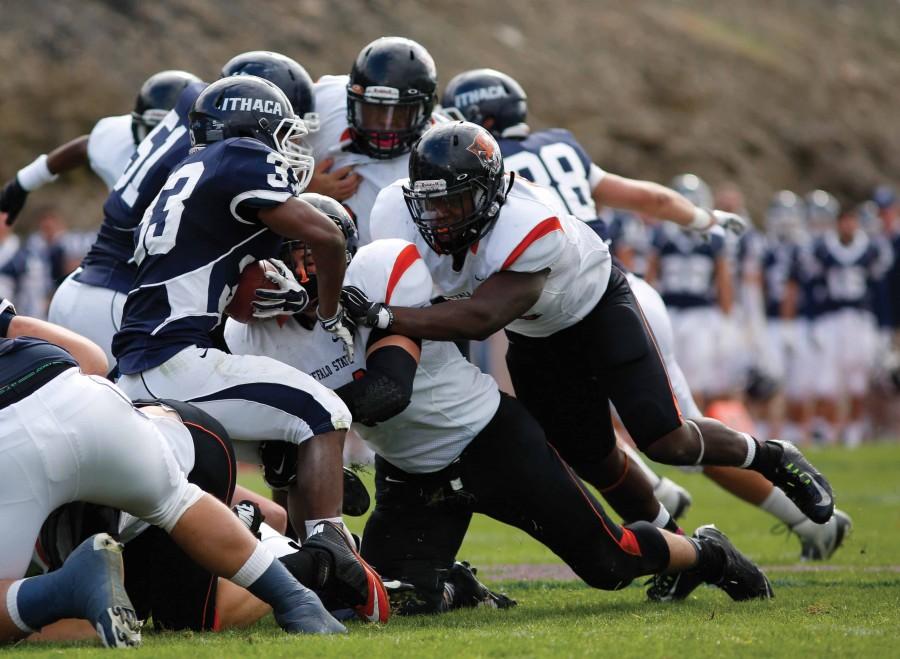 Going into this season, Buffalo State had not made a postseason appearance since the turn of the century; 2000 was the last time the Bengals played a game after their regular season slate. The team was hungry, motivated, and ready to take the next step, but they knew things needed to change. The Bengals knew they needed a change in culture.

“The family that we created, I think in my three years here, this team was definitely the closest,” said junior wide receiver Ryan Carney. “The journey that we experienced together, we fought together, it was really cool and fun to be around. The group of seniors had a lot to do with it.

“I think the past couple years of losing and that feeling of underachievement, everybody came into camp really motivated and we had 20-some players break their own personal records in our weightlifting program. It was just a different atmosphere this year.”

The Buffalo State football family posted their first eight-win season since 1998. They jumped out to a 5-1 start before a midseason slump saw them suffer two consecutive losses to Utica and eventual Empire 8 champion St. John Fisher. Buffalo State bounced back from the slump to win their final two regular season games in blowout fashion over Hartwick and Brockport. The Bengals capped off their most successful season in over a decade with a 59-36 ECAC Southwest Bowl win over host Waynesburg University.

Doherty faced double-coverage for much of the regular season. Waynesburg chose to commit only one man to him, and they ended up paying for it dearly.

Hoppy finished 24 of 34 for 335 yards and five touchdown passes, also scoring on the ground.

Senior running back Rich Pete was injured in his final game as a Bengal, going down in the second quarter after rushing for 51 yards on eight carries. Sophomore back Tre Jones stepped in and posted a career-best 95 yards on 19 carries, scoring twice.

Pete was taken to the hospital due to his injury, but did not worry about himself. Even in a hospital bed, the only thing on his mind was his team.

“I told them don’t worry about me, worry about winning this game,” Pete said. “It was a great opportunity for this team and program. I tried to stream it on my phone but I had no success. I didn’t get to see it or hear it on the radio, it was killing me.”

Buffalo State posted 551 yards of total offense while holding the Yellow Jackets to 354, including just 42 yards on the ground. Waynesburg quarterback Carter Hill finished 19 of 35 for 282 yards with five touchdowns.

Junior linebackers John Alessandra and Shaq Frederick led the defense as Alessandra made six tackles, one for a loss, while Frederick posted one of three Bengals’ sacks and another tackle for a loss.

Buffalo State improved to 4-0 all-time in Bowl games with the win over Waynesburg.

Carney posted four catches for 81 yards, which put him over 1,000 yards on the season.

Doherty received a message via social media from the man who’s 14-year old record he came eight yards from breaking.

“Derek Baker is number one, I’m number two,” Doherty said. “That’s how life goes sometimes. He told me through a Facebook message that I’ll be in the (Buffalo State) Hall of Fame someday.”

The Bengals started Hoppy at quarterback for a majority of the season, but pulled him out often as they had a competent backup in junior Dan Serignese.

Hoppy attempted 229 passes on the year, completing 124 (54.2 percent) for 22 touchdowns and eight interceptions. Serignese threw 63 passes, completing 32 (50.8 percent) and posting six touchdowns. He threw no interceptions. Hoppy rushed for 302 yards on 78 carries, averaging 3.9 yards per carry and scoring five times on the ground. Serignese rushed 36 times for 92 yards, averaging 2.6 yards per carry and scoring once.

Note that in college football, sacks are counted as rushes and the loss is averaged into a quarterback’s per-carry average.

Frederick and Alessandra anchored Buffalo State’s defense, posting 118 and 104 stops respectively. Frederick also registered an interception and three sacks. Junior defensive back Marquis Artis made 99 tackles and was one of five Bengals with a team-high three sacks. Junior defensive back Mitch Thomas led the team in interceptions with five, while senior Sherman Nelson posted four and sophomore Will Cheshire had three on the year. Kicker Marc Montana made 11 of 14 field goals, including a school-record 52-yarder.

A highlight of the regular season was a 38-27 upset win over nationally ranked Ithaca. Buffalo State’s defense forced six turnovers and scored two touchdowns, leading the Bengals to the win and handing Ithaca their first loss of the year.

“The big win versus Ithaca was huge,” Alessandra said. “The atmosphere was electric. We came in there, Ithaca was ranked top-25 in the country and it was their Hall of Fame Weekend and Coach Boyes, being an (alumnus) at Ithaca, we knew how much it meant to him.

“Ithaca versus Buff State is like a mini-rivalry amongst all the players and it was a really intense game. It was great going in there and our defense came up with a couple touchdowns and turnovers.”

Alessandra called the season a success, but just days after the Bowl win, was focused on next year and accomplishing the ultimate goal – taking the Empire 8 title and making a run in the NCAA playoffs.

“Next year, we just have to be prepared for every game and understand how close we were this year,” Alessandra said. “We need to make sure we get there by treating every game like it’s the last game. If we do that, I have full confidence that we’re going to win the conference and make a run (next year).”