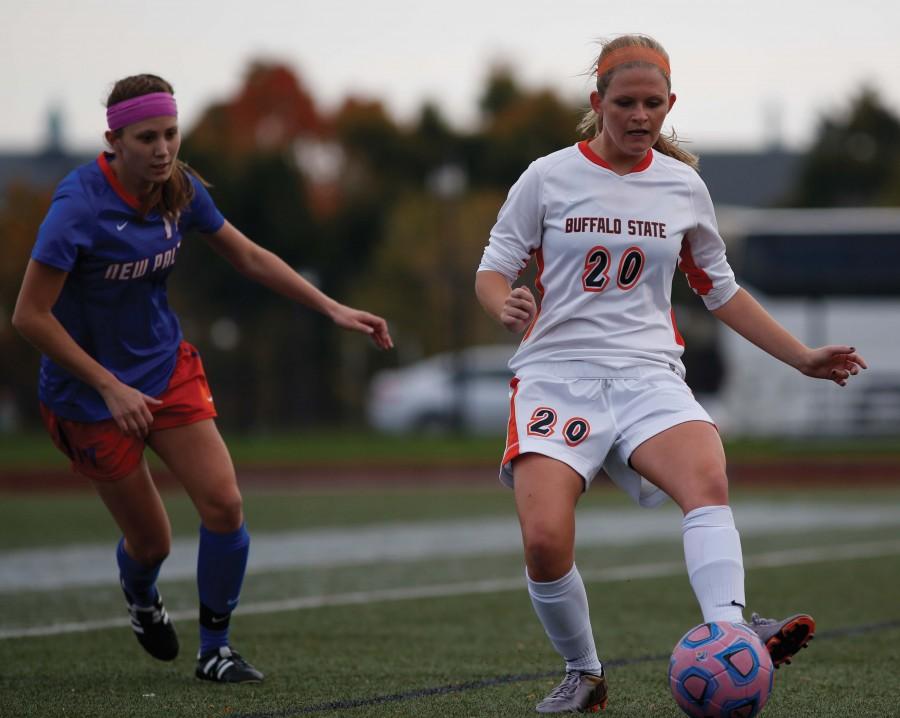 Sophomore defenseman Emma Laffey and the Bengals fell to Cortland, 1-0, in the semifinals of SUNYACs.

The Buffalo State women’s soccer team saw their season come to an end Wednesday after a 1-0 loss in the semifinal round of the SUNYAC playoffs to the Cortland Red Dragons.

There wasn’t any scoring in the first half, but possibly the biggest play of the game took place during the 26th minute. Freshman midfielder Victoria Colotti sent a shot towards the Cortland goal that looked to be going right into the net until a Red Dragon field player came across and reached up with her hand and swatted the ball out of the net.

“The girl just jumped up and swatted the ball out of the goal,” head coach Nick DeMarsh said. “It was clear, everybody in the stands stood up yelling, my whole bench stood up yelling, the only 3 people on the field that apparently didn’t see it were the two AR’s and the referee.”

When a field player swats a ball out of their own net using their hand they receive a red card, the team has to play one player short for the rest of the game and the opposing team is also awarded a penalty kick. Instead, the referee charged the Bengals with a foul and awarded the Red Dragons a goal kick.

“We are nine for nine on our penalty kicks this year, so I like my chances of winning that game if we get that call,” DeMarsh said. “Simple call, it’s an easy call, and it was soul crushing for the refs to pretty much decide the game right then and there.”

The referee wouldn’t even give DeMarsh an explanation as to why he made the call he did; he refused to speak to him.

“The assigner, the guy who is in charge of the referees apologized up and down,” DeMarsh said. “Sent me an email, said it was terrible, disappointing. And this referee’s punishment is a one game suspension. Meanwhile, my team is out, missed the opportunity to go to the final for the first time since 1984.”

Other than that controversial call, the game was about as even as it could be. Both teams finished with 10 shots, Cortland held the edge in corner kicks by a slim 4-2 margin and the Bengals had 11 fouls to the Red Dragons’ eight.

Ultimately, the Red Dragons held the advantage where it meant most, on the scoreboard. In the 57th minute, senior midfielder and captain Rachel Parker sent a shot sailing over freshman goalkeeper Nicole Torres’ head from about 18 yards out.

Although it was an obvious disappointment to lose, senior defender and captain Liz Malinowski tried her best to stay positive.

Malinowski was the only true senior on the team, having played all four of her seasons for the Bengals.

“I’m sad its over,” Malinowski said. “It was definitely my best experience and best contributing factor to my college experience.”

The loss to Cortland caps off a very up-and-down season for the Bengals as they finished with an overall record of 7-8-5 and a conference record of 4-4-1.

Although their record may not seem to reflect it, the Bengals were one of the best defensive teams in the league. They gave up more than one goal in regulation just once in their 20 games played. They held their opponents to an average of .95 goals per game, the third lowest average in the league behind only Plattsburgh who had a .89 average and SUNYAC champion Geneseo who had a .45 average.

Due to losing many key players to graduation after last season, an up and down season is what DeMarsh and the other coaches expected with a young roster.

“We discussed that early in the season, being so young we’re going to be inconsistent, we’re going to make a lot of mistakes,” DeMarsh said. “But the girls became good at the end of the year. They figured out how to play the way we wanted them to play, and we figured out what made us tick as a team, and hats off to the girls for doing so well and overachieving.”

The Bengals will only lose two players to graduation this season, defender and captain Liz Malinowski and forward Megan Chapple.

Although they came within a win of the SUNYAC Championship, sophomore midfielder Katie Shaw felt that it was a developing year for the Bengals that they just so happened to overachieve in.

“It was definitely a developing year,” Shaw said. “We had to get to know each other, we had to get to know the style of play that everyone was bringing to the table. The beginning of the season was kind of rough because it’s difficult to bring in different personalities and try to get together and play as one but as the season continued we really came together as a team and I think towards the end people knew we were going to be a threat especially as the playoffs approached.

“I’ve been a part of developing teams in the past and after you get that first year under your belt you already know each other and how each other play, the next year tends to be better,” Shaw said. “You already have that bond you worked on the year before so, I think this year has really set in stone a stepping block that we can use for next year to be even better.”

Although DeMarsh feels that it’s up to the players to ultimately get better he also sees a bright future for the program.

“If the right players come back and use the lessons we learned this year, then we will be strong again next year,” Demarsh said. “We’re excited about our recruiting class, and we’re excited about some potential transfers coming in, so I think we could be just as good if not better next year.”