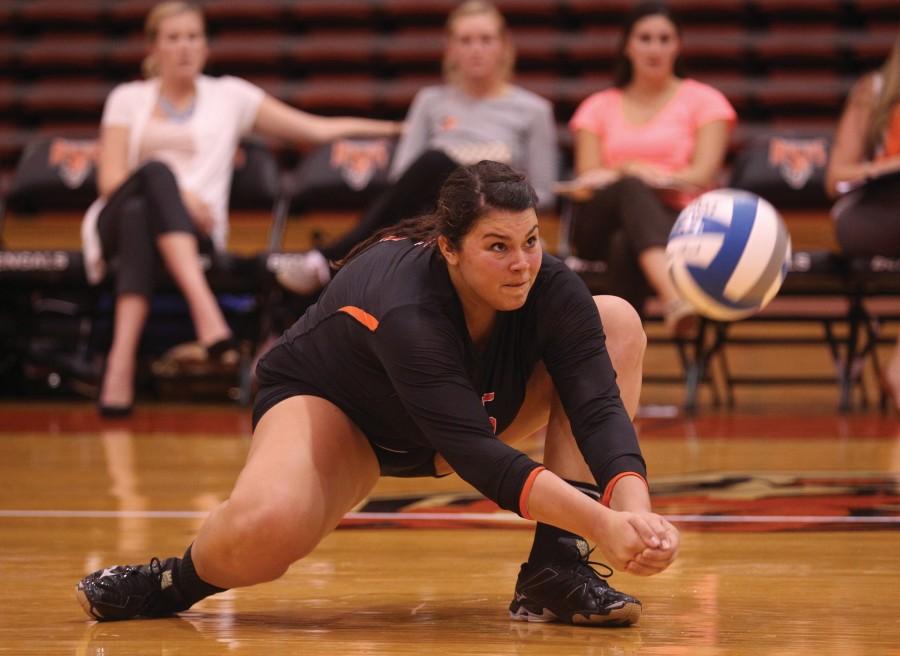 By any means necessary: that was the mantra of the SUNY Buffalo State women’s volleyball team coming into the final weekend of SUNYAC pool play in Plattsburgh.

With a playoff berth on the line, it was now or never for a Bengals team (21-10, 4-5) that had struggled with consistency all season in SUNYAC play.

With a 2-1 weekend, the Bengals qualified for the sixth and final playoff spot.

“It feels so great to make it into the postseason again,” head coach Maria DePeters said. “This hasn’t been the easiest year for us to get into the playoffs, so it is really nice to have this small victory but we have to be ready to go.”

The Bengals started out on fire in game one of SUNYAC play Friday against Oneonta, sweeping the Red Dragons in the first three sets. The Bengals won the first set 25-22, breezed through the second set 25-9 and won the third set 25-17. The offensive attack was channeled through senior Sam Parente, who registered seven kills and three blocks.  Junior Kayla Pyc added six kills and two blocks while junior Jennifer Cecchettini dished out 13 assists.

“I think we had moments of greatness this weekend but also had our slumps,” Parente said. “Our first game we had a flow and rhythm, we played as one and I think we know now what we need to do in these next two weeks to get ready.”

Day two proved to be the playoff-clinching day for the Bengals, who picked up right where they left off after day one, gathering a victory over Potsdam in three straight sets, 25-10, 25-22 and 25-18 respectively. The duo of Jessica Crooks and Sam Parente combined for 21 kills and four blocks in match one. Jennifer Cecchettini again led the team in assists with 22.

Game three didn’t prove to be as successful for the Bengals, who fell in five sets to eventual first round SUNYAC playoff opponent Cortland. It was a back-and-forth struggle throughout that saw a late Bengals rally come up short in the final set, with scores of 25-16, 20-25, 23-25, 25-21 and 11-15.

At the conclusion of the weekend, the Bengals squeezed into the sixth and final SUNYAC playoff spot. All that stands in the way of the pursuit of a second consecutive SUNYAC title are three non-conference matches before playoffs start on Friday, Nov. 7.

“I feel that we are much better than our seeding says about us,” Cecchettini said. “We are out there to prove to ourselves and to everyone else that we deserve to be here despite our seed. We deserve this title just as much as everyone else competing.”

The Bengals travel to Houghton, New York this weekend to participate in the Houghton Invitational, where they will face opponents Houghton, Alfred University and Utica. This invitation should act as a tuner for the playoffs.

“We have three more chances to play the best volleyball we possibly can in preparation for the SUNYAC playoffs,” DePeters said. “We know we can win against anyone going forward, we just have to have the heart and the drive to accomplish our goals.”