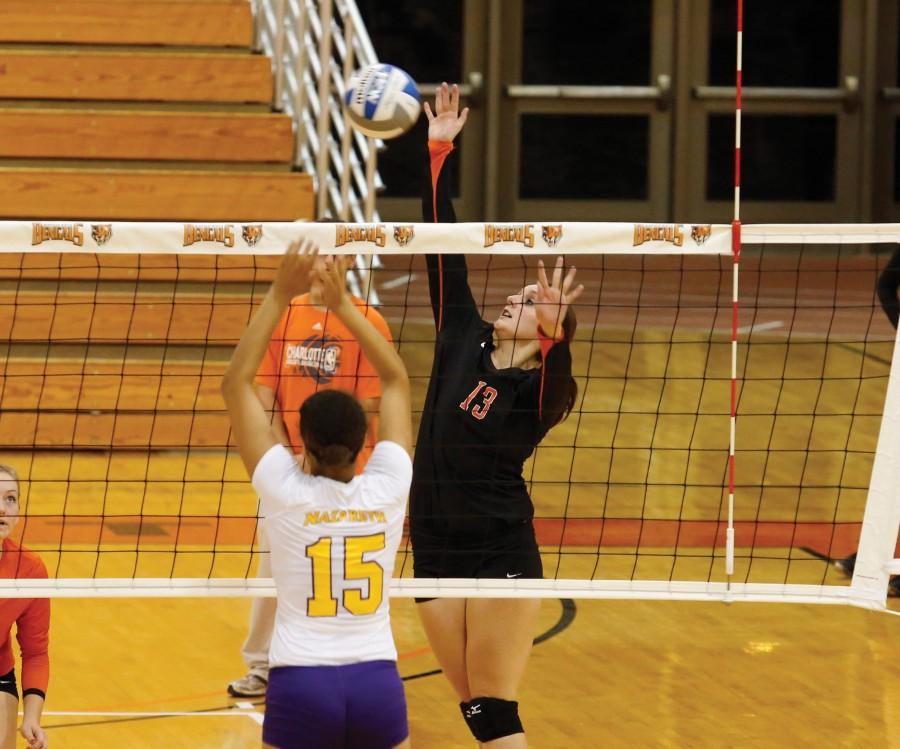 Junior outside hitter Hannah Renaldo had 11 kills in the three games over the weekend.

The Buffalo State women’s volleyball team traveled to Fredonia for a host of league matchups this past weekend and fell short of their ultimate goal. The Bengals fell to New Paltz, in three sets, a rematch of last year’s SUNYAC Championship on Friday. On Saturday, the Bengals swept Plattsburgh, in three sets. Buffalo State closed out the weekend with a five-set loss to Fredonia in its second match on Saturday.

The Bengals went into their second SUNYAC tournament of the season looking to rebound from the previous one, in which they dropped two of their three matches to league opponents Fredonia and Oswego.

The Bengals (15-9, 2-4) were unable to repeat last year’s championship-clinching performance the first day of the tournament, dropping their first match by losing all three sets to New Paltz. As the match progressed the Bengals improved, but they could not match their opponent, losing 25-18, 25-20, and 25-22. Sam Parente led the Bengals offensively, registering seven kills, while Jennifer Cecchettini dished out 20 assists.

“We have to have more mental toughness as a team,” said head coach Maria DePeters. “We have to understand what it means to compete at a high level all the time.”

The losses hurt the Bengals’ chances greatly, who are desperately trying to keep pace in a competitive SUNYAC division in which the top six teams make the playoffs. They are currently sitting at eighth out of ten.

“In my opinion it was very disappointing, we could have done better and have the talent to be in the top of our conference,” said senior Jessica Crooks. “When it comes to conference games, we can’t measure up.”

The Bengals still have a chance to make a comeback with one fourth of the season yet to be played, including one SUNYAC tournament to participate in before playoffs, which may prove to be the Bengals last chance to fight for the right to compete in the postseason.

“The Plattsburgh game was really good for us, we had a lot of fun,” junior Jennifer Cecchettini said. “We can’t afford to lose; we have to make sure that each day is better than the last in terms of getting better.”

This weekend also ends the Bengals’ long-standing road trip, as they haven’t played at home in over a month. They start a five-game home stand on Tuesday, Oct. 14 against non-league opponent Medaille.

“I’m excited to be back home on our floor, especially because it’s our senior night” said Cecchettini. “It’s going to be nice if people show up and give support to us.”