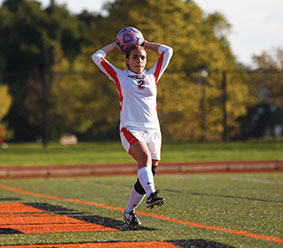 The Bengals won their first SUNYAC game against Brockport, 4-1, this past Friday in dominant fashion.

The beginning of the game was a scoreless, back-and-forth competition until Kristin Seiferth scored in the 37th minute, her first goal of the season. The Bengals stayed on the attack with another goal by Meghan Allen just four minutes later. The Bengals led 1-0 at halftime.

“We were fearless,” Coach DeMarsh said. “Generally, Brockport plays on intimidation. We went at them. We executed our game plan.”

The second half started out slowly as both teams couldn’t find much offensive success. During the 60th minute, the Bengals added to their lead when Tianna Hatch scored her second goal of the season. Less than two minutes later, Meghan Allen scored her second goal of the game and season to put the Bengals up 2-0. Allen hasn’t played soccer in over a year and scored a pair of goals in her season debut.

“It was the most relieving feeling that I can still produce goals at this caliber,” Allen said.

Brockport finished out the scoring with a goal in the 65th minute by Courtney Szczesniak, her third of the season.

“It’s one of the best feelings,” Allen said on winning the team’s first SUNYAC game of the year. “Not only was it a win to start conference play, but also a win on the road, which is always a challenge.”

“I was extremely proud of the girls for working hard and executing so well,” senior Liz Malinowski said. “We have to stay humble and be ready to go back to work tomorrow and every SUNYAC game that is to come.”

Coach DeMarsh is sticking his nose to the grindstone and not over-embellishing on this one win.

“I am thrilled with this result and we were very good today, but its only one game,”DeMarsh said. “Back to work; tomorrow we go again.”

The Bengals took on Geneseo Saturday and fought hard in a back-and-forth game with a controversial ending.

In the first half, both goaltenders were standing on their heads making saves for their teams. Finally, after 64 minutes of play, Geneseo’s Kelsey Raschke scored to give them the lead.

In the 78th minute, Katie Shaw stopped a clearance by the Geneseo defender. The ball deflected off of her and went wide of the net, but not out-of-bounds. Shaw saved the ball by crossing it, which deflected off another Geneseo player and into the net.

The goal was called an own goal, which tied the game up for Buffalo State and ultimately sent the contest to overtime.

During overtime, Geneseo got three shots off, while Buffalo State was shutout. Bengals’ goalkeeper Jessica McCarey held strong and forced a 2nd overtime.

The 2nd overtime was similar to the first with a low number of shots, all coming from Geneseo. In the 105th minute, as a Bengal was clearing the ball, it hit a Geneseo player. The ball went back to the goal line and out-of-bounds. The referees decided that it deflected back into the Bengals’ player and out, giving Geneseo a corner kick.

Geneseo took what they were given and ran with it, as Emily Green immediately scored off of the corner.

“It should have been a goal kick, for sure,” senior forward Megan Chapple said. “I saw the whole thing happen. It went off their [player’s] leg. But whatever the case we should have cleared the corner.”

When asked what changes would be made for the next game, DeMarsh said: “You don’t make changes after a close loss necessarily. Sometimes it’s more important to reinforce the things you are doing and do them better.”

“I think our focus could have been better,” Chapple said. “I also think we could have dealt with the atmosphere of an away game better.”

The loss dropped the Bengals’ overall record to 3-4-2, 1-1 in SUNYAC play. Their next game will be Thursday at Alfred State.