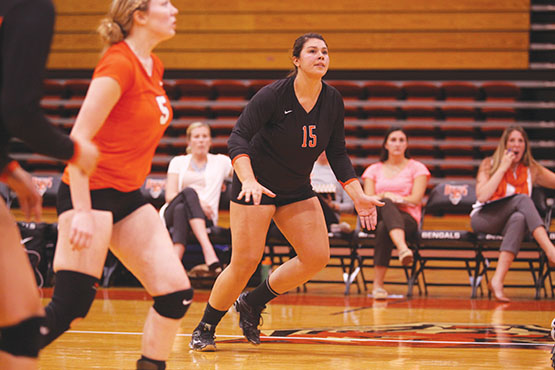 Sam Parente had a team-high 14 kills in the Bengals four-set win Geneseo.

Volleyball is a game of runs. When a match begins, despite the overall record of each respective team, anyone has a chance to walk away with a win.

The Buffalo State women’s volleyball team participated in its first round of SUNYAC pool play and experienced what the concept of any given weekend really meant.

The match was plagued with unforced errors by Buffalo State, who posted an attack percentage of 13 percent, with 30 hitting errors and ten service errors. Sam Parente and Kayla Pyc led the Bengals offensively, posting 13 and 12 kills respectively. Jennifer Ceccehettini pitched in with a career-high 42 assists in the game.

“We had to go out there and play Buffalo State Volleyball and we didn’t that first game,” DePeters said, “Our mental preparation was off.”

The offensive efficiency in game two was much improved for the Bengals, who posted a 21.5 kill percent nearly eight and a half percentage points better than the previous game. They also poured in 13 blocks in the winning effort.

“We huddled up and we told ourselves that we were not going home without this win,” said Parente, the team’s captain. “We had to show ourselves we could do anything when we play together and we went out and did it.”

The story of the weekend for the Bengals was the play of first year starting setter Cecchettini who posted a career-high in assists in game one with 42, only to match that total in game two, giving her 84 on the weekend.

“It makes you pretty nervous honestly,” Cecchettini said on the new role “but my teammates and coaches have been they’re supporting me and helping me all along, so I owe my accomplishments all to them.”

It is back to the drawing board for the Bengals, as coming back from falling to 1-2 in SUNYAC competition is tough, but there is potential for great things for the Bengals if they can get it all together.

“It starts in practice, we need to have more ball control and put more pressure on ourselves,” DePeters said. “I can only hope the girls get better, but for that to happen, they have to want to get better.”

The Bengals are preparing to hit the road this coming weekend to compete against four non-league opponents at the Blue Devil Invitational in Fredonia, NY.

“I see so much potential in this team,” Parente said. “We just have to come together and turn it on for a great end to the season.”