Bengals hang tough in second half of loss to undefeated Cortland 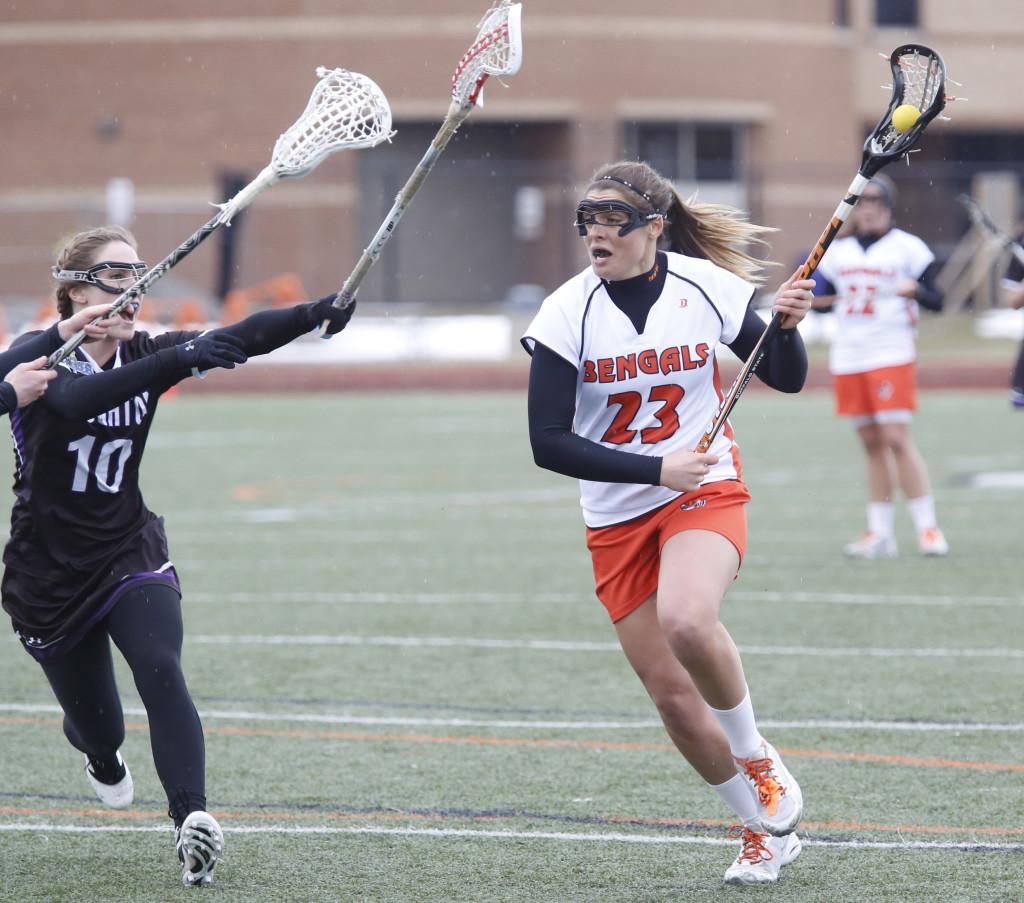 The Buffalo State women’s lacrosse team couldn’t keep up with No. 2 Cortland, losing 18-4 at SUNY Cortland Stadium Complex on Saturday.

Senior attacker Becca Martinez scored twice, giving her a team-leading 34 goals on the season. Meghan Farrell contributed a goal and an assist, and Alexis Wilensky netted a single marker.

Undefeated Cortland utilized its many offensive options en route to a 14-point victory in which 10 different Red Dragons scored goals.

The Red Dragons led 13-2 at the half, but the Bengals stiffened up in the second and allowed just five goals in the final 30 minutes.

However, Buffalo State couldn’t find its offense all day, and got off just 16 shots compared to Cortland’s 41. Cortland held a 17-to-7 advantage in draw controls, and was on the favorable end of a 20-to-15 turnover differential. Colleen George played a full 60 minutes in net, and managed to stop eleven shots.

“The second half of the game was much better than the first,” George said. “We held them to five goals which is a huge deal. If we had continued to play the way we did in the first half, or had gotten down on ourselves, the score could have easily been 30-1.”

Interim head coach Kelsey Schwann said that the Bengals just didn’t do enough to be in position to pull out a win against a technically sound team like Cortland.

“We couldn’t win any draw controls, so we didn’t possess the ball very much at all,” Schwann said. “Cortland is undefeated and ranked No. 2 in the nation. I just watched (film of) the first half, and I don’t believe they dropped a single ball. We were a step behind, and they capitalized on that. They executed very well.”

Limited time of possession and inefficient shooting also played roles in the loss.

“We just weren’t able to possess the ball like we needed to,” Martinez said. “Cortland had the ball for most of the game. When we did have the ball in our end, we just couldn’t finish. We need to be less panicky with the ball, and not force shots that don’t need to be taken.”

“We have to learn to possess the ball,” Farrell said. “We try to score a goal every time and mess up or miss the shot.”

Cortland’s depth proved to be an advantage over Buffalo State.

“They have three different lines, whereas we have five people on our bench,” senior midfielder Nicole Paulhardt said .

“It was hard going up against a large and strong team,” George said. “They had fresh legs on the field after every few goals, which is something we don’t get to do seeing as we’re a smaller team.”

“They both stepped up and played some really great defense,” Schwann said. “They’ve come so far since the beginning of the season and I was really impressed with what they were able to accomplish [Saturday].”

The Bengals are now 7-5 overall and 2-3 in the SUNYAC, and are still in contention for a playoff spot with three SUNYAC matchups left on the schedule—all at home.

The top five teams qualify for the playoffs. The Bengals are currently tied for fifth place with Brockport, and hold the head-to-head tiebreaker after beating the Golden Flashes earlier this season.

On paper, the Bengals face an uphill battle to make the playoffs, starting with a matchup against a tough Fredonia squad (9-3 overall, 3-1 in SUNYAC) on Wednesday before playing Geneseo (10-1 overall, 2-1 in SUNYAC) on Tuesday. However, Buffalo State finishes out the regular season on Saturday against a Potsdam squad that has lost each of its four SUNYAC games so far this season.