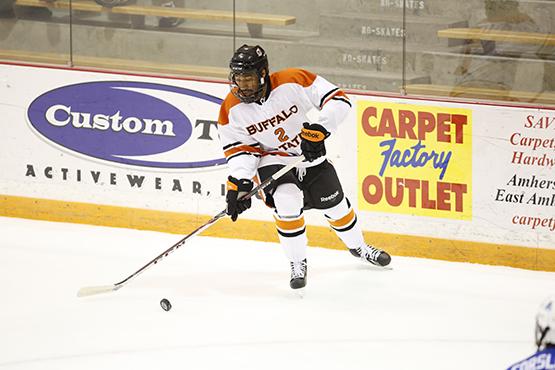 The Buffalo State men’s hockey team capped off the regular season with a 3-2 overtime loss at No. 11 Geneseo and a 3-2 loss at Brockport to maintain fourth place, ensuring a rematch against the fifth-seeded Golden Eagles in the SUNYAC quarterfinals on Wednesday night at the Sports Arena.

The Bengals came out against Geneseo like someone was shooting fireworks at their feet. They showed they could skate with the nationally ranked Knights by fore-checking, winning puck battles in the corner and maintaining clutch faceoff wins in their own zone.

The Bengals had four man advantages in the first period, but the struggling Buffalo State power play couldn’t tally a goal in the opening period, sending both teams into the second period scoreless.

Buffalo State kept the pressure going even though Geneseo killed off its fifth penalty of the game. Two minutes prior to Geneseo returning to full strength, Buffalo State broke the scoreless drought with a goal by Mac Balson. It was Balson’s first of the season and was assisted by Sean Hrivnak and Clayton Lewis.

After killing off a Nick Schiro tripping penalty, Buffalo State struck with another goal. Forward Taylor Pryce scored his fifth of the season after two missed shots by Geneseo. The goal was unassisted and it sent the Bengals’ confidence skyrocketing heading into the third period.

But the start of the third period didn’t go Buffalo State’s way. After Geneseo killed off a Bengal power play they were rewarded with a power play of their own in which they converted on. David Ripple scored his sixth of the year to put Geneseo on the board. Zach Vit and Jack Caradonna assisted the goal on the play.

Geneseo tied the game at two with just two minutes to go. Justin Scharfe scored on the man advantage, and Cardonna and Tyler Bickler assisted the goal that forced overtime.

Geneseo forward Stephen Collins scored a minute into the overtime to put a dagger through the Bengals’ heart.

Although Buffalo State fought hard, Geneseo’s tough offense proved to be too much.

“I thought we played a great two periods,” said goaltender Kevin Carr. “ We had them on their heels and showed them our style of play. We unfortunately took a few penalties in the third that hurt us and good teams like Geneseo will make you pay for it.”

Against Brockport, the Bengals had to climb their way back in the game after falling behind by two early on. Buffalo State’s power play finally struck gold after Pryce scored his sixth of the season to bring the Bengals within one with two minutes remaining in the second period.

Buffalo State then scored another goal 20 seconds later to enter the third period tied at two. The goal was scored by Hope and assisted by Cory Gurski and Charles Lapierre.

“We just wanted to keep the momentum going,” said Hope. “I got the puck down low and worked a high cycle with Charles and he made a nice play to get it to Cory who shot it and I just went to the net and Cory’s shot just happened to hit my stick and went in.”

Brockport scored the game winner just two minutes into the third period. The goal was scored by Nick Marinac on a power play and made the final score 3-2, ensuring the Bengals head into a playoff game rematch Wednesday on a two game losing streak.

“One thing you want to do is stay out of the penalty box,” said assistant coach Jeremiah Crowe. “They have good offensive presure and they put their goals in pretty late. You always want to play for 60 minutes. We need to make sure we have our priorities straight and to maintain all of our assignments.”

The two losses brought the Bengals to a 9-11-5 record, but they still keep home ice advantage for a rematch against Brockport in the SUNYAC quarterfinals, the fourth straight season Buffalo State has hosted a playoff game.

“Wednesday we need to put together 60 minutes of hockey and play the way we know we can,” said sophomore forward Brett Hope. “We need all 20 guys going and everyone buying in and on the same page and working hard and getting things going our way.”