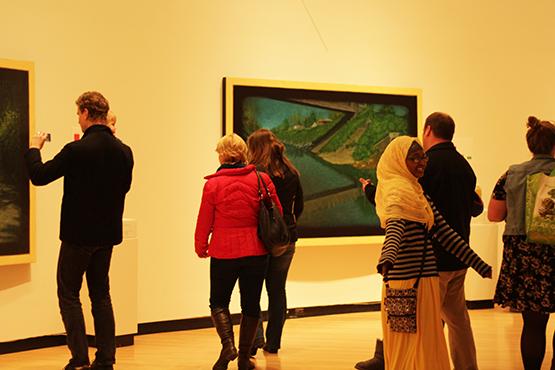 Students and visitors tour the newest exhibit, "Water," at the Burchfield Penney.

The Burchfield Penney Art Center has remodeled its first floor to house seven new exhibitions that will feature new works from SUNY Buffalo State professors and other local artists.

Works from the collection of Charles E. Burchfield will also be on display.

The exhibits play with the idea of water as the main source of life.

“Water is really the basis for everything [in the exhibitions] but it’s about coming up with a new lens to look at the environment,” said Scott Proteack, associate director and chief curator at the Burchfield Penney.

“Water,” an exhibit from the Burchfield Penney collection, looks at the different ways that Charles E. Burchfield used water in watercolors and also at the way that he represented the landscape in water.

“With the ‘Water’ exhibition, we are kind of tying in thematically what is going on conceptually in the other galleries,” said Nancy Weekly, curator and head of collections. “So it’s a way of looking at Burchfield’s work a little bit differently…water literally as streams, as snow, as rain, or metaphorically or symbolically.”

While chatting in the gallery’s conference room with Tullis Johnson, curator and manager of archives at the Burchfield, the sound of classical music sneaked in from the adjacent hallway as Johnson explained the composition behind the works.

“Most of the water pieces are probably landscapes, though not all of them,” Johnson said. “The Burchfield exhibition, for example, is focusing on his depictions of water or use of water, so it’s pictures of water, but also his use of the watercolor medium.”

Walking through the gallery, the sound of shoe soles making contact with the hard floor is evident in the otherwise quiet setting as Johnson points at several pieces of art while summarizing the intentions behind the artist’s work.

Johnson spoke about another piece, “Biological Regionalism,” by Alberto Rey, who is an artist, fly fishing guide and educator. It features five paintings that focus on the Scajaquada Creek as it has evolved over the years from a stream that was home to fish and wildlife to one that is now a sewer due to human action.

“His work examines the life, or lack of life, in the Scajaquada,” Johnson said. “The creek has become an overspill for the sewers in Buffalo, and so he took water samples and examined them for things like E. coli and other dangerous organisms and chemicals that tell you what kinds of things were found in the water.”

A chart with the results of the scientific research accompanies each painting. Also included in Rey’s exhibit is a video projection of a live leech found in the creek and a 70-foot long map of the Scajaquada Creek above the paintings that show the viewer where in the creek each painting was done.

Milbrand’s exhibition consists of seven paintings, which he made by mixing watercolor paint with water, pouring it into different ice cube shapes, freezing it and then putting it out on paper.

“What I do is I film the process of melting and then in some cases I project the process of it melting back on the surface so that there is this flux between the painting that is dried and the process that was used to create it,” Milbrand said.

In addition to the projections of the ice melting, some pieces also include video imagery from water sources that inspired Milbrand, such as the Niagara Gorge, Lake Ontario and the Atlantic Ocean in Maine.

“It’s definitely about water as both us destroying it but also the beauty of it as well,” Milbrand said.

Other exhibits at the Burchfield include “Bridging the Great Divide,” “Hydro-Graphic,” “Semi-Automatic Chalkboard” and “Family Tree.”

Proteack said all the exhibits hope to serve one purpose: to raise concern for what is happening in the environment by using art to represent and address environmental issues.

“So really trying to look at the broader picture of environmentalism, but doing it through the individual art,” Proteack said. “By bringing the different types of works together, the end result will be different access points into conversation about the environment through different artists.”