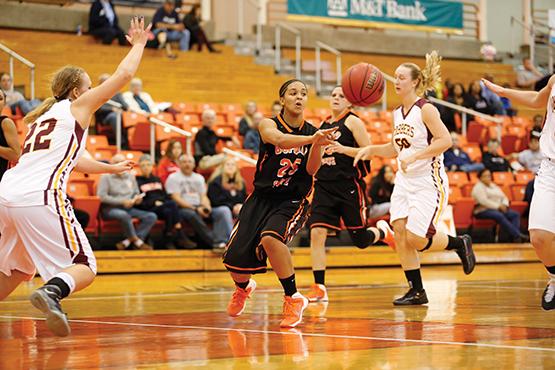 Forward Staci McElroy became the first women’s basketball player in Buffalo State history to post two 30-point games. Her first 30-point game came against RIT earlier this season, and her second helped the Bengals to their seventh straight victory, a 78-55 win over New Paltz on Friday. “I wasn’t aware that I had broken a record until I read the article online,” McElroy said. “It’s always cool to break a record.” Forward Ashley Wallace contributed 19 points, guard Kala Crawford had seven points, 10 rebounds and three assists, and guard Mary Cain had 10 rebounds, four points and four assists in the win. The Bengals were only up 37-32 at halftime, but took control in the second half. Buffalo State grabbed 52 rebounds while New Paltz had 36, and shot 44 percent from the field compared to New Paltz’s 33 percent. “We definitely had a better second half” said head coach Sue Roarke. “We played better defense, we got out more in transition, and we took advantage of our strengths inside against them.” Mental toughness despite questionable calls from the officials was key in the win. “The second half was our better half,” said captain Kelly Kell. “The first half we were letting things like the refs’ calls get to us a little bit. The second half we pulled together and decided that we can’t control every factor of the game and decided we just had to be mentally tough.” McElroy also disagreed with some of the calls from the officials. “The officiating didn’t always go our way but I think we stayed composed and fought through it,” she said. “New Paltz is a pretty physical team,” said Roarke. “I think they got to us a little bit mentally. The officiating was pretty tight and we had some trouble with fouls; we weren’t particularly mentally focused in the first half but did a much better job in the second.” Buffalo State’s seven-game win streak came to an end on Saturday with a 70-54 loss at Oneonta. The Bengals were only down 28-26 at halftime, but allowed the Red Dragons to score seventeen unanswered points to open the second half until finally scoring their first basket of the half 6:48 in. “We didn’t get a lot of shots off to start the second half,” said Roarke. “We drove to the basket a couple of times and there was a lot of contact but we didn’t get the call and that kind of frustrated us.” The Bengals’ 33 percent shooting from the field contributed to a lack of offensive success, as did 21 turnovers. “Probably, the biggest factor was the 21 turnovers,” said Roarke. “That really limited our offensive production. Defensively, it wasn’t one of our better games either.” “We really didn’t execute very well,” said Kell. “We didn’t really do what we planned on doing. We weren’t getting any transition buckets, which is usually the best part of our game. We let them control the game and slow it down. We just didn’t come out as strong as we usually do.” The Bengals are looking at the loss as a wake-up call to finish the rest of the season strong. “It doesn’t necessarily have to hurt us,” said McElroy. “It’s better that we lose now rather than later when it counts. We still have four games left so we have to learn from it and finish the rest of the season strong.” “Now we’re more focused on our goal,” said Kell. “I think we’re ready. We’re definitely the top team, without a doubt.” The Bengals host Brockport and Geneseo this weekend. Both are teams they beat in January earlier this season. “We’re going to work hard and keep on doing what we’ve been doing,” said McElroy. “We’re going to be hungry coming off a loss and want to get back on the track we were on before.” The Bengals are currently in first place in the SUNYAC by half a game.