Opportunities for self expression fall upon open ears 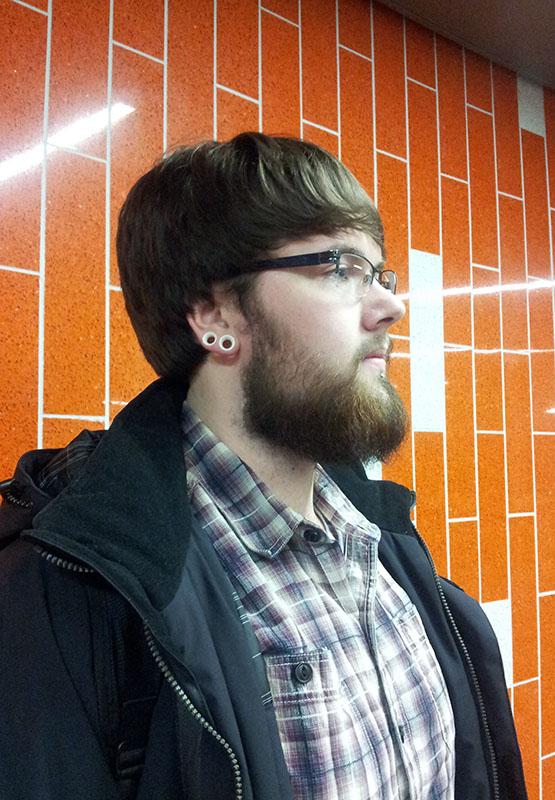 Sophomore Tyler Smith displaying his two gages. One is a double zero and the other is a zero, placed slightly higher.

Ear modification is one of the oldest practices in history. Almost every ancient civilization — from the Egyptians to the Mayans, Aztecs, Chinese, and even Middle Easterners — wore ear plugs or some type of piercing. So how has this trend remained so relevant today?

The answer is simple: diversity. Ear mods can be used to represent wealth and status, represent a religious or cultural artifact, or just express personal flair.

Freshman Amy Constantaneu has two regular earlobe piercings, an industrial piercing, and a triple helix. Her most recent piercings are the triple helix — three piercings on the upper cartilage — and her industrial (a bar through the cartilage) on the ear opposite the helix.

“I plan on getting more,” Constantaneu said. “But eventually I am going to run out of space.” She smiled and touched her ears as she explained that she feels ear piercings are a great form of expression.

“Everything you do is a way of expressing yourself,” she said. “Especially what you do with your body.”

Chelsey Balistrieri, another freshman, recently got her tragus pierced at Hardcore Tattoo and was very excited about it, saying she’s considering doing the other side, too. The tragus is the small part of cartilage that projects from the ear canal.

“I’ve always wanted my tragus pierced because I’ve always liked the way it looked on other people,” she said. “I thought (Hardcore Tattoo was) friendly and very professional. It was clean and I would totally go back there again.”

Gauges have been around for a long time and are becoming more widely accepted — even in the career world. Sarah Bearor, a junior, has had gauges since March of her sophomore year, which are now double zero sized.

“I like the fact that they’re different,” she said. “Anyone can have a tattoo or simple piercings, but gauges hurt a lot more and they take a lot of care, time and patience.”

Although Bearor has always thought gauges were cool, it took her a long time to go through with it. When she finally picked up some tapers from Hot Topic to begin the process, her parents were of two minds about it.

“My mom to this day still does not like them whatsoever,” Bearor said. “However, my dad couldn’t care less because I am old enough to make my own decision about body modification.”

Tyler Smith, a sophomore, also has his ears gauged. However, unlike most would expect, Smith has his ears gauged twice on each ear — one size 00 and the other size 0 slightly above that one. He finished stretching his first hole in his junior year of high school and after seeing pictures of people with dual plugs, he decided to do it for himself because of how much he loved the idea of “odd” body mods.

“The reactions I get are usually that of wonder,” he said, adding that he’d love to increase the size of his gauges once he gets a stable career.

Piercings and gauges aren’t the only form of ear modification, though. Junior Katherine Maguire has a black star tattoo on her right ear, next to her cartilage piercing.

“I chose a star because I’ve always been fascinated by them and I constantly draw them,” she said. “They’re always just a little reminder for me to keep reaching for the stars.”

Most people who see her tattoo like it and think that it is in a neat location.

“I think the ear is a good place to get a tattoo because you can show it off, but you can also keep it hidden (with your hair) for a professional setting,” Maguire said.

Anna Beall, a professional piercer, has worked at CowPok in Buffalo for over four years and loves it. She first went to CowPok when she was 16, and finally, while getting her tragus piercing there at 18, she asked if it was hiring.

After a few months of counter work, she started a two-year apprenticeship, the general policy at CowPok, before becoming a piercer. She has multiple ear piercings herself, including her industrial and tragus, and loves the way they look.

“I enjoy the piercing process,” she said. “Every (piercing) is interesting because it deals with anatomy.”

Another new and fairly recent ear modification is “elf ears,” a surgical procedure that involves folding, sculpting and shaping the ear to look pointed. This somewhat trend is highly invasive and permanent. The procedure only takes a few hours, during which the ear is cut and reshaped under anesthesia, and sewn into place and bandaged.

The jury is out on how elf ears look. Balistrieri was grossed out at the idea, while Constantaneu said she thought they were cute. Beall said they don’t deal with anything surgical at CowPok, but everyone likes something different in the world of body modifications.

All ear mods are a form of expression that can be both loved and hated. Certain piercings are becoming trendier by the day — so who knows? Someday everyone might have ears like those of an elf.