For the home opener 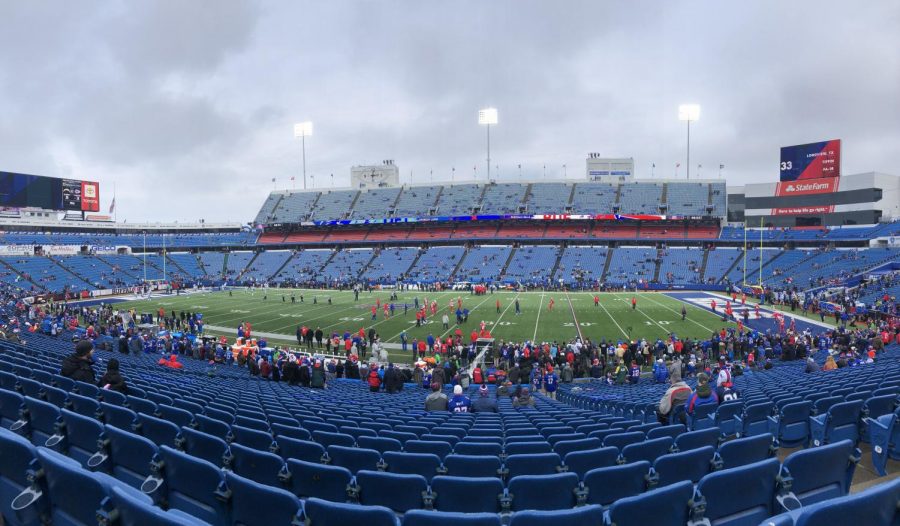 A partially full stadium from the Buffalo Bills game against the Detroit Lions on December 16, 2018.

Buffalo Bills’ fans are still unsure of what to expect for the team’s first home game for the 2021 season in September at the newly named Highmark Stadium in Orchard Park.

On April 13, the news came down from Erie County Executive Mark Poloncarz that a Covid-19 vaccination would be mandatory for any fan that would be attending a Bills home game this upcoming season. However, they plan on allowing the stadium to operate at 100 percent capacity.

Gov. Andrew Cuomo, however, appeared to have a differing opinion than the Erie County executive and disputes the county’s authority to make these plans.

“I don’t think the county executive is legally correct,” Cuomo said on a conference call. “We’re just not there yet to make those decisions.”

It appears the governor is not as definitive on the matter as Poloncarz and it is still uncertain if Erie County alone can reopen the stadium without help or approval from New York State.

The Buffalo Bills have not yet released plans of their own to reopen the stadium.

“As we did last year, we will continue to cooperate and comply with all New York State and local government regulations regarding our sporting events,” the Bills said in a statement.

The response from fans of the team has been very mixed overall. Some fans appear to be apprehensive to get the vaccine, even if it was the only way they could attend the game.

“I didn’t like hearing that,” said Tyler Calkins, a 17-year-old Bills fan from Niagara Falls. “It just makes me feel like it’s forcing people, who consider going to the game like a second home, to get it even if they don’t want to.”

Just as some fans appear to be against it, some, including Mike Schopp, radio personality from WGR 550, appear to be willing to take the vaccine to attend the games.

“This is sort of normal for me. I just don’t think of these sorts of things as infringements.

“Overall, I just feel like life is a bit happier this way. This protects other people; this avails me to go to football and hockey games. What’s the downside,” Schopp said on air.

No further details have been released about the protocols concerning Bills regular-season games or other events such as training camp or preseason games, which also would have spectators under normal circumstances.

There are still other notable events yet to take place for the offseason including the draft and the release of the NFL schedule, so it seems that fans must wait to get further clarification on protocols for the regular season, whether it’s from the team, the league or government officials.