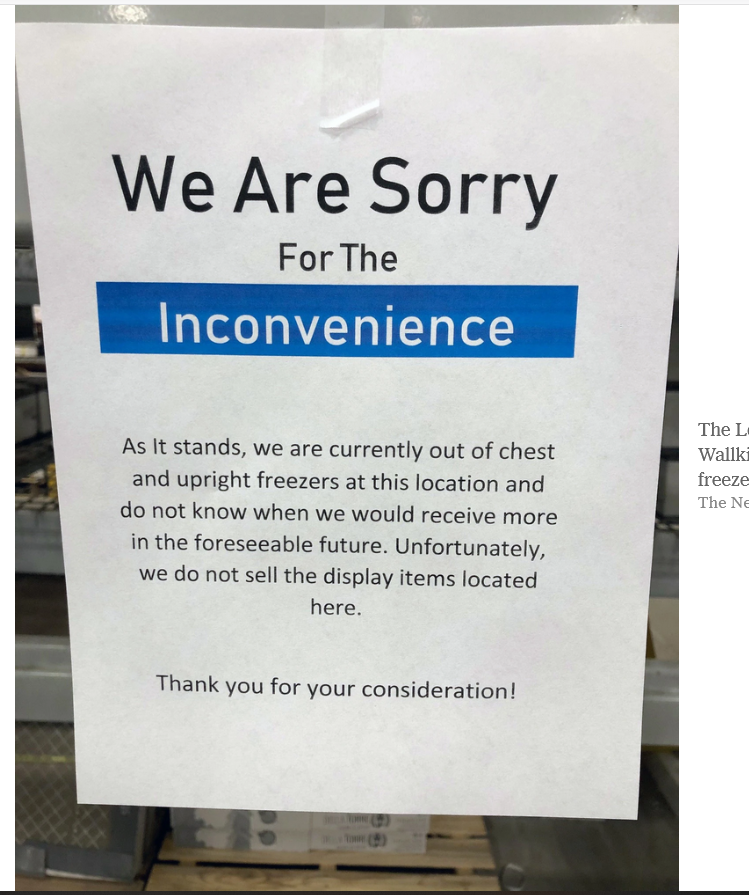 The Lowe’s in the Town of Wallkill, N.Y., was sold out of freezers as of Wednesday

The citizens of the United States are back on a shopping spree as the second wave of COVID-19 approaches. This time they are stocking up on box freezers.

COVID-19 has caused more than 231,476 death in the U.S in less than a year. Americans all over the country are still facing the effects of the deadly virus, like emotional, physical, and financial crises.

According to GlobeNewswire, in 2020, profits in the freezers totaled to $3.6 billion in the U.S. Even with such profit, companies are still facing difficulties keeping up with manufacturing freezers for their negligible staff and supplies. Retailer stores such as Home Depot and Best Buy are facing shortfalls on chest freezers as people line up to buy them.

People that bought stocks of toilet paper, hand-sanitizers, masks, and hand gloves during the first wave are now buying chest freezers for the second one. The CEO and co-founder of OfferUp, Nick Huzar, stated that he has seen a double-digit increase in the number of freezers sold and the reason behind it, was the fear over food shortages.

The Home Depot on 2100 Elmwood Avenue is facing a shortfall on freezers according to the multi-store asset protection manager, Joe Petri. He said Home Depot did not have any freezers in stock for the last 15 weeks.

“Everybody bought them up because they wanted to stockpile food,” Petri said. “And there were no materials to make new ones because the supplies for making fridges-freezers ran out.”

He said the corporation gets stocks of freezers once in a while, but it ends up getting sold by the end of that day.

People are skeptical about Trump’s upcoming vaccine, and therefore, are stocking up on food and appliances; and people do not know what will happen once the vaccine comes out.

“I see two-three freezers when I come to work, but it gets sold within two hours,” Petri said. “Some people were taking two at a time.”

He said that Home Depot only had, six-eight, 17-inch-wide, mini-fridges.

“I saw a customer purchasing one of those fridges, today,” Petri said. “In fact, I sold one myself.”