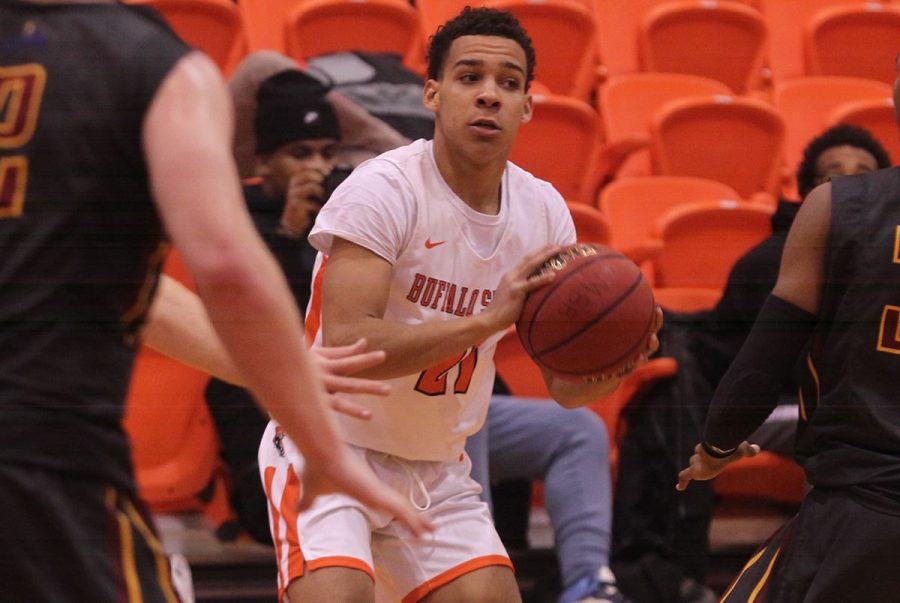 The SUNY Buffalo State Men’s Basketball team’s 19 turnovers were too much to overcome falling 79-76 to the SUNY Geneseo Knights Tuesday night at the Buffalo State Sports Arena. It was the Bengals’ 11th straight loss of the season.

With three seconds left in the game and down two points, Buffalo State’s Sheldon Adams went to the paint looking for a bucket but instead drew a charge.

The Bengals went for an immediate foul. The Knights’ Aaron Davis knocked one down from the free-throw line, putting them up by three.

Adams took a shot from half court but missed, giving SUNY Geneseo their seventh win of the season.

Adams finished with a total of 23 points and four assists. The Bengals couldn’t stop SUNY Geneseo’s Michael Gannon who ended the game with 20 points.

It was a heated game that had five lead changes.

Buffalo State was up by three at halftime, but Geneseo’s defense put more pressure on the Bengals in the second half. The intense defense led to easy offense for the Knights.

Geneseo was also efficient, making over 50% of their field goals.

Bengals’ guard Jordan Christopher was a walking highlight reel as he put up a double-double with 17 points and 10 rebounds. Adams also threw down a nasty dunk from a pass from Aaron Davis on a fastbreak early in the second half.

The Buffalo State Women’s Basketball team fell to SUNY Geneseo, 53-68, in the first game of the doubleheader Tuesday night.

Both the Men’s and Women’s Basketball teams will travel to Potsdam to play the Potsdam Bears on Friday. Tip-off for the Women’s game is scheduled for 5:30 p.m., the Men’s game will follow.