Back during a time when people still said "eat my shorts." 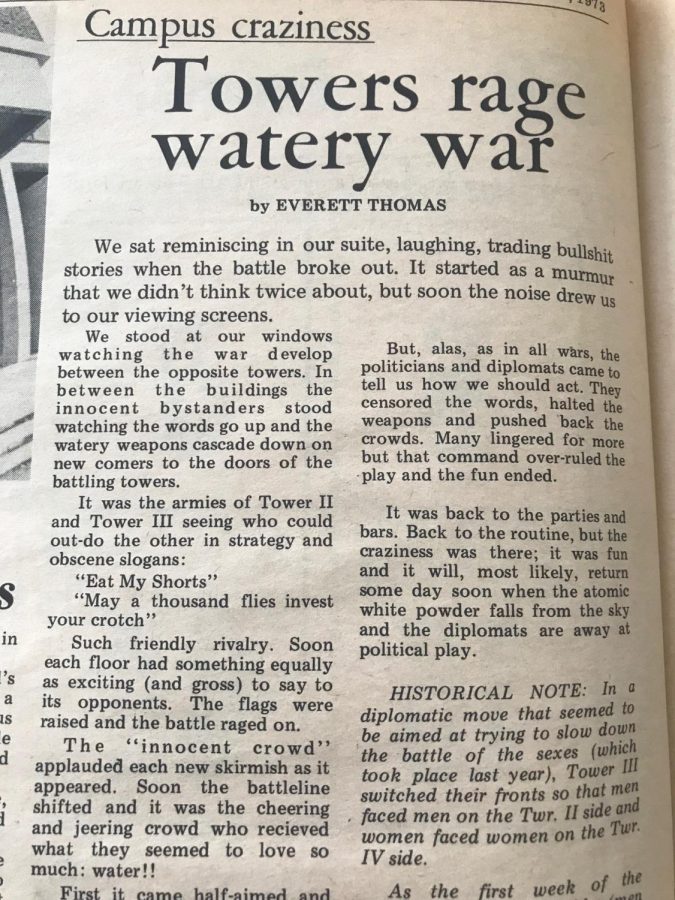 Rivalries on SUNY Buffalo State’s campus are nothing we are short of in 2019, from competing dance teams to dueling fraternities to heated intramural competitions. (And god forbid anyone on this campus say “Fredonia State.”) But while we have grown accustomed to mock trial playoffs and the dance battles during homecoming week, nothing compares to the watery rivalry that raged between Tower II and Tower III 46 years ago.

On September 11, 1973, The Record reported on an epic water war between the towers, “Towers Rage Watery War” read the headline. Hard to imagine, but remember this was a time when the drinking age was still 18, bar were open on campus, phrases like ‘Eat My Shorts” were still in fashion and fortnight tournaments were long out of conception. A beautiful time, when all a Buff State resident had to do to entertain oneself was throw a water balloon through someone in the adjacent towers bedroom window.

“We stood at our windows watching the war develop between the opposite towers. In between the buildings the innocent bystanders stood watching the words go on up and the water weapons cascade down on new comers to the doors of the battling towers.”

If you’re doubting this, thinking ‘fake news’ or it seems to be too good to be true, IT WASN’T!

Yes, somehow the bold and brave students got away with waging an all-out water war between resident halls. Pedestrians lounging between the towers, waiting for class gathered at the base of the towers and rejoiced as they found themselves in the crossfires, taking ricochets, of this aqua explosion. Until eventually, unable to control their urges, the two dueling tower armies joined in a great alliance turning on the masses.

“First it came half-aimed and flung at their feets. Then sporadic spurts by sharp shooters from the roofs of the towers created a more interesting attack upon the scrambling heards… soon new waves of water gushed down in plastic bags and through hoses.. And battle music began to play.”

Think about the same situation transpiring in 2019, it wouldn’t! Wet iPhones, drenched Yeezy’s, soaked Supreme bags and of course the undeniable implausibility of getting hundreds of students to interact together. Without the promise of free pizza or extra credit? Unlikely. As hard as it is to believe somehow, in 1973 without text messages or Facebook, our alumni managed to come together to have fun in the pure spirit of adolescent comradery. 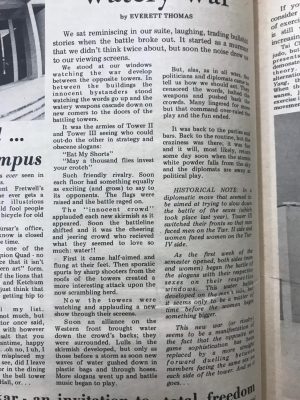 Times were undoubtedly different but some things on campus remain the same since the time of the great water war. you’re wondering, “Where the hell were all the RAs?” Oh they were there.

“Alas as in all wars, the politicians and diplomats came to tell us how we should act. They censored the words, halted the weapons and pushed back the crowds… and the fun ended… It was back to the parties and bars.”

While like all good things, the water war did come to a screeching halt, I think there is something to take from this look back on our school. Something we as students and participants in a community should think about every day we step on this campus. It is to step out of our comfort zone, color outside the lines, bend the rules a little and engage each other whenever you get the chance. Friend or stranger, everyone enjoys some good old fashion tomfoolery. Take a lesson from the great water war, put your phone down, and have some fun while you’re here. For all you know, you might never get the same chance again.

This article is a part of our Throwback Thursday series. On Thursdays, we go through our Record archives to find something interesting or relevant. If you have a suggestion for a specific topic or story, send us an email at [email protected]

To access more Record archives, all issues from 1913-2006 can be found online here.