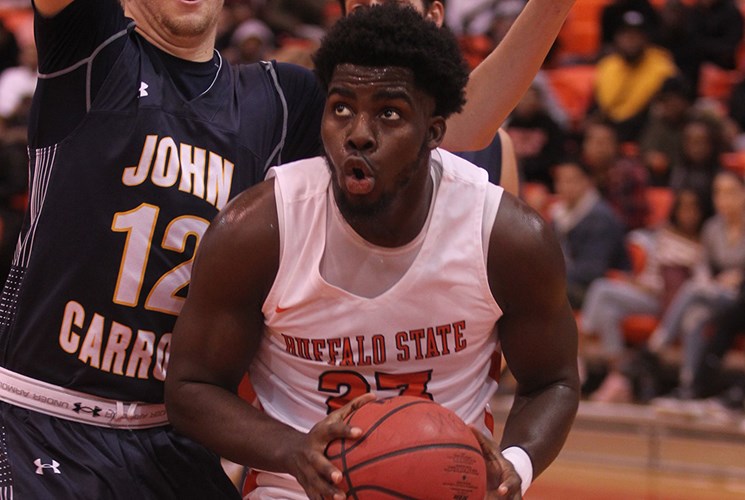 The SUNY Buffalo State Men’s basketball team sank 16 three-pointers, in their 81-73 victory over the visiting Geneseo Knights on Tuesday night at the Sports Arena. The victory also marked the first win for Bengals assistant coach Kevin Glover, who took over on the bench as head coach Fajri Ansari had to miss the game.

“That’s my guy,” Bengals guard Dom Grayer said of Coach Glover. “We all love Coach. We stand behind him. We joke around and say ‘don’t leave us’ and now he might actually leave us now that he got his first win.”

But it didn’t get off to the start the Bengals envisioned.

After the Knights started the game on a 5-0 run, Glover called a timeout and had to pump his guys up.

They answered with a 14-0 run and even had a double-digit lead, but the Geneseo Knights caught fire in the final five minutes of the first stanza. They went on a 17-0 run to finish the first twenty minutes, which led to visible frustration by Glover on the sideline.

Out of the locker room, Geneseo continued to have momentum for the next four minutes or so as their lead swelled up 12, the largest of the game for them.

After that, The Splash Brothers took over.

On the ensuing possession, Bengals guard Dom Grayer sank a three and he began to feel it from there. Grayer finished with 30 points on 10-for-18 shooting. He sank eight three-pointers, falling one shy of matching his career high.

“He had a slow start,” Bengals forward Kay Grant said. “I told him to keep shooting, and he got his confidence and he did his thing.”

The Bengals slowly clawed their way back into the game, before exploding as they went on a 16-0 run and with a little more than four minutes left. The Bengals had a 70-59 lead.

Bengals guard Sheldon Adams was able to sink a couple of key three’s during that run. He finished with 14 points and three three-pointers.

“It feels great,” Adams said. “A great team effort. We gotta push that into the weekend so we can get two wins on the road.”

Grant was efficient as well throughout, posting another double-double with 12 points and 15 rebounds.

“I know every time I go into the paint and I attract the defense, I know I can dish it to (Grant) or if my shot misses, I know he’s down there to clean it up,” Bengals guard Ryniek Holloway said. “It’s always good to have security down there”

The Knights had one comeback left in them but it was too little, too late and the Bengals picked up a huge win late in the season.

“That’s something that you go down in history for,” Grayer said. “We put up a lot of shots after practice working on our jump shot. To tie a school record, that’s something.”

The Buffalo State Bengals still have a chance to make the conference playoffs as they currently sit in 8th place in the standings. They will be back in action on the road on Feb. 8 as they will take on the New Paltz Hawks. Tip is scheduled for 7:30 p.m.