Men’s Hockey gets off to slow start in SUNYAC play 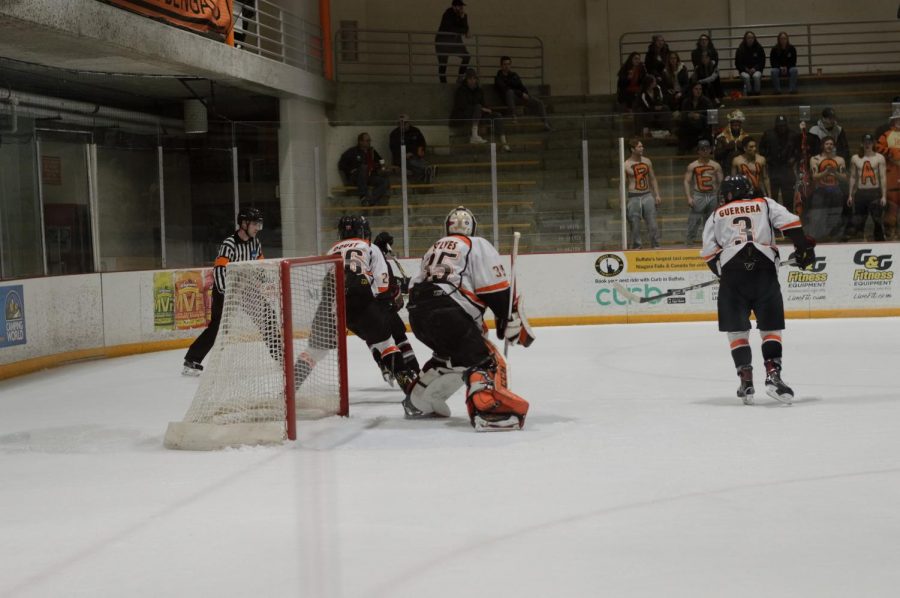 The SUNY Buffalo State Men’s Hockey was winless in their first weekend of conference play, falling 5-1 to Brockport on Friday and tying Geneseo, 4-4 on Saturday.

The Bengals had a difficult time generating any offense in the first SUNYAC game of the season against the Brockport Eagles.

The first period was all neutral zone play with few sparks of offense. When there was a good scoring chance for Buffalo State, it was stolen by Brockport’s senior goalie Jake Moore who stacked the pads for a great 2-on-1 save.

The Bengals did a good job killing two penalties but carried no momentum from them. A weird bounce from a shot below the goal line by Danny Rock opened the scoring for the Eagles. Later in the second period, Connor Hutchins gave Brockport a two-goal lead after cashing in the rebound.

Early in the third, the Bengals got their first goal of the night from Braeden Doust, which gave the team hope, but it was all Brockport after this point in the game.

Brockport’s Hunter Laslo scored a power play goal, and just over a minute later teammate Ethan Solat added another goal to give the Eagles a 4-1 lead.

Down by three, Minch was pulled for the extra attacker after a late penalty was taken by Brockport. Dock Gentzler took advantage of the empty net and scored the final goal of the night.

While there wasn’t much offense out of Buffalo State, Brockport goaltender Jake Moore was strong throughout the game making 18 saves.

The Bengals traveled to Geneseo Saturday for their first meeting with the team that knocked them out of the playoffs last season.

Hugo Petit opened the scoring in the first period for the Bengals, getting his second goal of the season. A minute later, Carson Kelley came right back and tied it up for the Knights.

A power play towards the end of the first, gave the Bengals a 2-1 lead heading into the break as Sam Maddox put one home.

Buffalo State added to the lead with a goal from Zach Remers, but the Knights proved resilient as they would come back quick again and score only 17 seconds later as scored Will Campion. Later in the second, Geneseo’s David Szmyd tied the game at two.

Remers got his second goal of the night early in the third period. However, a Buffalo State penalty allowed the Knights to tie the game with a goal by Mitch Ferguson.

Men’s Hockey will head to Skidmore on Friday for a 7 p.m. faceoff against the Thoroughbreds.