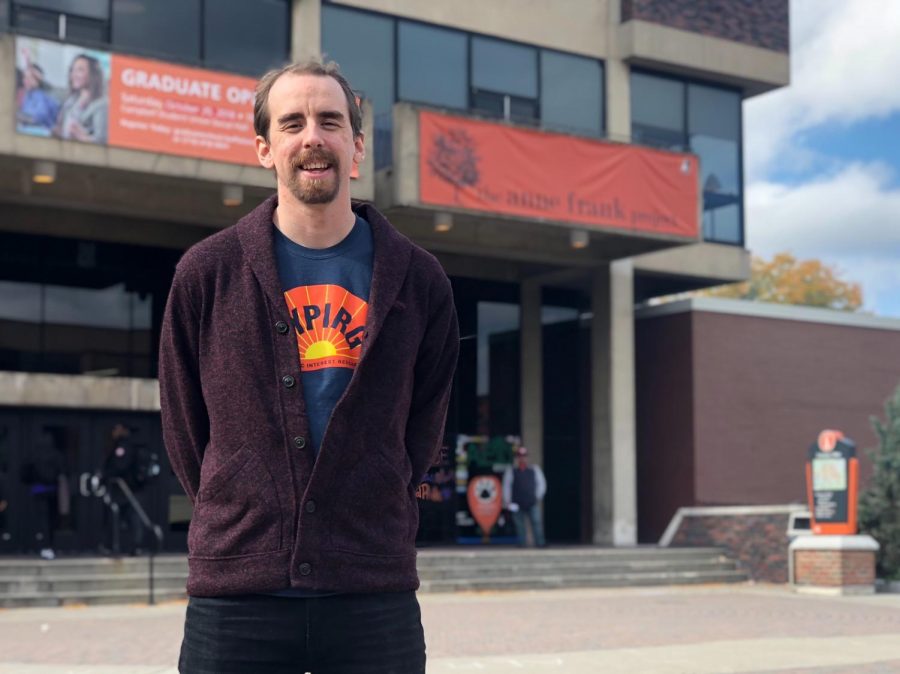 SUNY Buffalo State history lecturer Joseph Golombek Jr. recalls one election a few years back when only three or four of the college’s students voted.

He would know because he was running. Golombek Jr. is also a city council member, representing the North District, which is the district the college lies in.

“And that’s very frustrating, that people couldn’t have taken five minutes to walk to Rees St. It’s not that far away,” Golombek Jr. says.

Perhaps only a few students trekked the November walk across campus and down Rees St. to the Asarese Community Center, where the current polling place for 1300 Elmwood Ave. residents is.

But what if the students didn’t have to leave the Campbell Student Union to vote?

On a recent afternoon, Scott Benedict sits in the NYPIRG office, located in the same student union’s basement, and remarks on how cold it is in the group’s office.

“I know we can’t control them,” he says, pointing to the thermostat.

The thermostat, no. But Benedict has bigger things to worry about than a chilly office. As the Western New York regional coordinator for New York Public Interest Group (NYPIRG), a non-profit, non-partisan, student-run (though Benedict is not a student) political information group, Benedict is focused on superintending something else.

That something is the location of the 26th district’s polling place. A district that encompasses Buffalo State’s campus, outlined by the Scajaquada Expressway, Elmwood Avenue, Forest Avenue and Grant Street.

Over a decade ago, the polling place left Buffalo State’s campus, where it had been for years, and moved to Asarese. Benedict isn’t sure why it was moved off campus in the first place, but he wants it moved back.

His argument is clear. Sure, he wants to see increased student voter turnout. That’s an integral mission for NYPIRG, a group that often stakes out in the campus union to register voters. But he also says Buffalo State offers more parking and security, which were the two main concerns raised by the Erie County Board of Elections when NYPIRG first raised the issue to the board in spring.

Councilmember Golombek Jr. is open to moving the polling place back to Buffalo State, but not for all the same reasons. His main concern is accessibility for all community members, noting Rees. St. has parking issues.

“Rees St., I know, has had problems in the evening because the kids that are using the facility in the evening, some of them are older kids and they park there, so it’s difficult for people to drive over there,” Golombek Jr. says.

Generally, the decision to relocate a poll would be made before polling place reminder mailings are sent out to registered voters in the district, usually before the New York State primaries.

Once the primary rolled around and the location hadn’t moved, Benedict knew the proposal had not yet been approved. He said he wasn’t able to speak to the commissioners, but spoke to a couple floor managers. One person told him it was still in the review process.

Around mid-September, he went to the Board of Elections and told them it was soon going to be too late to move the polling place by this November’s election.

Benedict and his six-to-seven-member club collected student signatures for a last-ditch effort to relocate the polling place by this November. He planned to drop off his petition to the Board of Elections, as well as remaining student registration forms, on Oct. 12, the last day for voters to register in New York.

His team ended up collecting 430 petition signatures, nearly half of their 1,000 person goal. In the end, it wasn’t quite enough to move it by this November’s election.

Justin Rooney, democratic office manager at Erie County Board of Elections, says it’s an early priority for next November.

“I don’t know specifically what the reason is for it not moving this year, other than we may have just ran out of time with so many of the other things we had going on with moving sites,” Rooney says. “But I do know that Commissioner Zellner is very big on moving it for next year.”

“Politics doesn’t really play a role in what we do here,” Rooney says. “Whether they’re Democrats or Republicans, we want to give them the opportunity to vote.”

United Students Government (USG) President Joseph Cicatello would like to see the polling place moved back to campus, citing that students are “engaged, caring, inclusive and educated.”

“Although, the polling place isn’t far I believe students should have the immediate access to the polls,” Cicatello says. “In the political climate of today, I find it imperative the polling location is localized and moved to campus.”

Benedict acknowledges that a lot of students who live on campus, if registered at all, are registered in their hometown. Which is why he tries to encourage dormers to register on-campus. He says the amount of absentee ballots he sees is very small.

Benedict expects to see a gradual increase in voter turnout once the polling place is located in students’ plain sight, especially over a four-year cycle.

“If folks know that it’s easier for them to vote here on campus, if they could do it on the way to lunch… that would be wonderful,” Benedict says.

You might recognize Scott Benedict. He, or his predecessor, Wes Thomas, may have come up to you and asked you to register to vote. Benedict often sets up a table in the student union, asking students to sign up to vote.

Back in NYPIRG’s office, Benedict can’t change the thermostat. But he plans to induce a different kind of change. One that, for next year’s election, will bring voters to Buffalo State’s arguably cold student union.