A pair of pick-sixes wreak havoc for Football, fall to Morrisville; 38-14 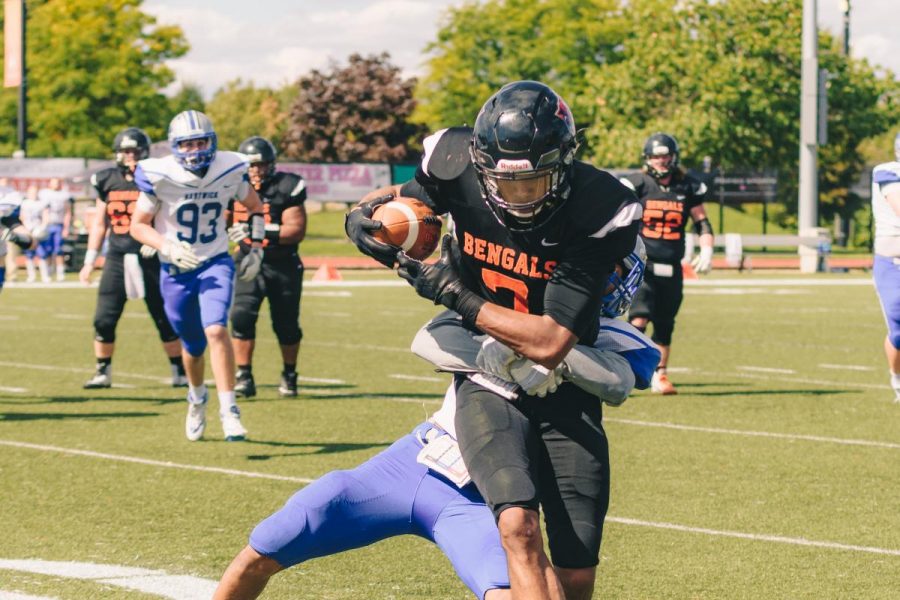 Jordan Evert blocked a punt and recovered the ball for a touchdown in Buffalo State's 38-14 loss to Morrisville. That was first play of its kind for the Bengals since 2007.

After back to back road losses the SUNY Buffalo State football team was thrilled to be playing in front of their home crowd once again, unfortunately, they didn’t give the fans what they were hoping for.

A game filled with self-inflicted mistakes made it incredibly difficult for the Bengals to keep up with the Morrisville State Mustangs falling 38-14 in Empire 8 action Saturday afternoon.

“It’s hard to have a chance to win a game when you give the other team points,” Buffalo State head coach Jerry Boyes said, “14 of them directly coming off of interceptions.”

After going back and forth, Kevin Torrillo threw a pick-six to Mike Bodnar giving Morrisville State a 7-0 lead with 8:53 left in the first quarter.

On the following drive, Torrillo threw his second interception of the day giving the Mustangs possession at the Bengals 27 yard-line.

The Mustangs also turned that takeaway into points extending their lead to 14-0 on a five-yard scamper up the middle by Kraig Gilbert at the three-minute mark of the opening quarter.

After their offensive struggles, the Bengals made a change at quarterback bringing in Freshman Tony Maple.

“Maple has what us coaches call the X-factor, he can make plays with his legs that other quarterbacks can’t usually do,” Boyes said.

Maple’s performance wasn’t pretty. On his first pass attempt of the game, Maple threw an interception returned for a touchdown giving Morrisville State a 21-0 lead.

The Mustangs tacked on a second quarter 24-yard field goal by Zan Stewart making the score at 24-0 halftime.

After a promising opening drive by Buffalo State, Maple fumbled the ball away on a quarterback keeper on third and nine in Morrisville State territory.

The Bengals defense held strong and forced the Mustangs to a three and out on their opening possession of the second half.

Buffalo State blocked the Mustangs punt which was recovered in the end zone by receiver Jordan Evert at the 8:22 mark of the third quarter for the Bengals’ first score of the game.

On the following possession, the Mustangs went into their bag of tricks and fooled Buffalo State with a halfback pass resulting in a 24-yard touchdown pass from Nick Edmond to Kyle Tuohy with 4:46 left in the third quarter extending the score to 31-7.

On the following drive, the Bengals got inside the Mustangs 10-yard line but it came to a halt when a false start penalty on fourth and one made things much more difficult. They failed to convert on fourth down and gave the ball back to Morrisville State.

The Mustangs added to their lead after a 49-yard run by Nick Edmond with 11:53 left in the fourth quarter extending their lead to 38-7.

Torrillo re-entered the game in the fourth quarter and gave the Bengals a bit of momentum leading them on an eight-play, 69-yard drive resulting in a five-yard touchdown run by Martin Bailey for the game’s final score.

The Bengals look to turn things around next Saturday as they welcome the Utica Pioneers at noon for the final home game of the season.

Buffalo State is hoping to end their 2018 campaign on a high note after a season of lows.

“We’re hoping to end the season on a positive note,” Boyes said. “At this point, we’re playing for pride. Let’s finish the season with a few wins and have the seniors go out on a good note.”