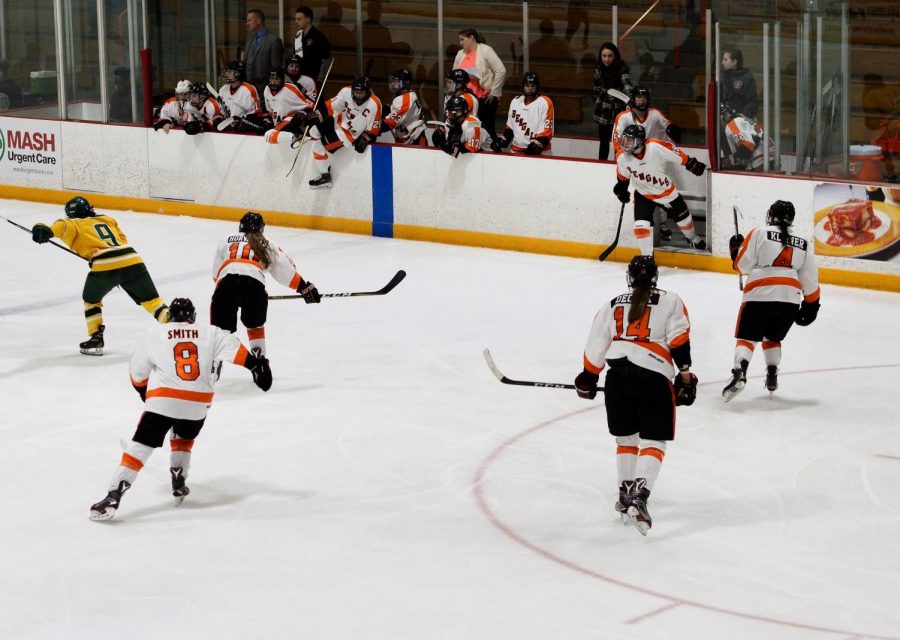 Other than an assistant on the coaching staff, no one in the SUNY Buffalo State Athletic Department knew more about the Women’s Hockey team than Jim Fowler.

That made the current department budget and Ice Arena manager the perfect choice to be the team’s interim coach this season.

“I was hyped,” senior Emma Ruggiero said when she found out Fowler was going to the coach this season. “I kept talking to him a lot, finding out what was the status (on the coaching search) and he was working hard to find us somebody who cares and it ended it being him.”

His appointment on Sep. 12 ended a long two and a half months that left the Lady Bengals in a state of uncertainty after Jennifer Wilson left Buffalo State for the same position at Lake Forest College in June.

“I know the upperclassman really well,” Fowler said. “I always thought they were good kids and hard workers. I’m really getting to know the whole team now. I’m excited.”

Before taking over his current positions, Fowler served as the head coach of the Men’s Hockey team from 1996-2005.

Throughout the summer, Ruggiero, along with fellow senior captains Maddy Kromer and Megan Reukauf, worked hard to keep the team together.

“I just constantly told everybody that this school is working really hard to fill that gap,” Ruggiero said. “They have to just hang on a little longer. We did many team events just to get us together. I’m really proud that people stayed because there was a lot of doubt.”

Reukauf even joked they were ready to have practices even without a coach.

“I don’t know how good it would’ve gone, but we were ready to do it ourselves,” Reukauf said.

“There was a disconnect at the end of the year,” Kromer said. “This year, Fowler is preaching for the three captains to buy into him. This year if we stay on the same page we’ll do very well.”

The Bengals lose 10 players to graduation including the program’s all-time leading scorer in Erin Gehen and arguably best goalie in Justine Silvia. Class of 2018 members also hold half of the program’s All-Time Top 10 scoring spots.

Despite all the production that has left, Buff State believes that their success won’t.

“I’m very excited about what I have on my roster right now,” Fowler said. “From what I see I have a better team (than last year). They’re going to come out here and work together as a unit and we’re going to be successful. One or two people don’t make a team. What I have is a team.”

Kromer and Reukauf are set to secure the Bengals’ blueline in 2019.

Also, on the backend will be junior Kayla Kopinski and sophomore Courtney Cavarello this season.

Sophomore Bri Gawronski, who had a 2.40 GAA average in 10 games last year, will compete with freshman Rose Quattro to take over for Silvia in net.

The Women’s Hockey team will begin its season this weekend with a non-conference doubleheader at SUNY Canton. Faceoff is Friday at 4 p.m. and Saturday at 2 p.m.