Football preparing for its first home game under the lights 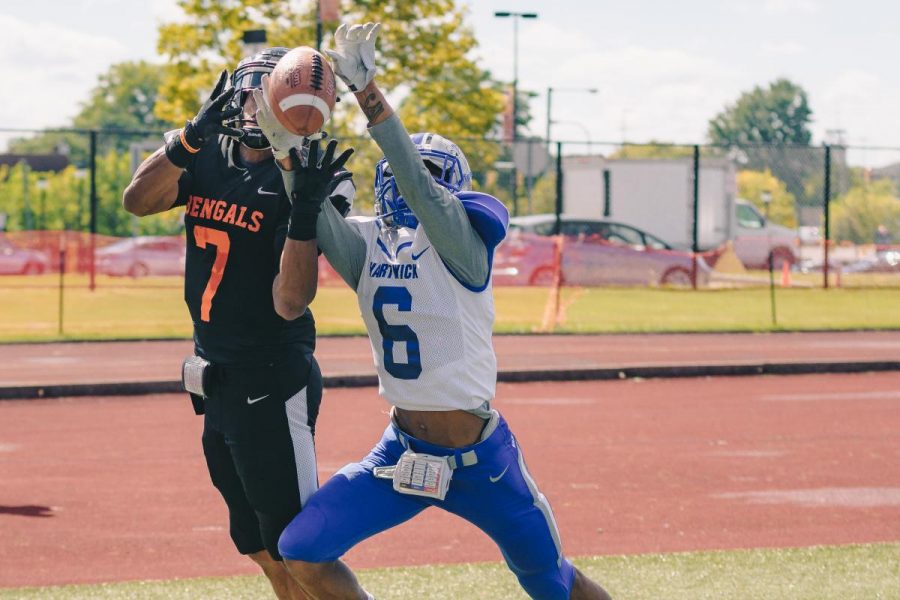 Jordan Evert leads the Bengals with 411 receiving yards and five touchdowns this season.

The SUNY Buffalo State football team has never played under the lights at home.

Until now, that is.

Buffalo State will play its first home game under the lights on Saturday against the Alfred University Saxons at 6 p.m.

The lights were put in last year. A few soccer and women’s lacrosse games have been held under them, but never a football game.

Head coach Jerry Boyes said it is a different atmosphere when playing under the lights, and it was felt at the soccer games.

“I don’t know what it is, you can’t put a finger on it but there’s a bit of an excitement to it,” Boyes said. “And I’m certainly hopeful that we’ll be excited for it.”

“We’ve been talking about it all week, everybody’s like ‘yeah we get to play under the lights’ and stuff like that, and the crowd,” Evert said. “So it’s going to be intense.”

Buffalo State is coming off its first win of the season against Hartwick this past weekend. The offense put up 41 points in the win, the most in a game this season. Evert caught one of the six touchdowns, a 4-yard pass from quarterback Kevin Torrillo.

Evert’s 411 receiving yards lead the team, as do his five touchdowns. Torrillo and Evert have had a strong connection all season long, something they’ve been working on since they both attended Sweet Home High School.

“Our chemistry has been there since high school until now, so I mean that’s why we’ve been connecting so good,” Evert said.

Evert said Torrillo is able to see what the defense is doing and then can tell Evert what route to run based on that.

“Reading a defense, taking looks at the corners and their depth, how the corners play,” Evert said. “Once he finds that out, he‘ll give me a play or tell me a certain route to run and I’ll just run it. Another thing too is he puts the ball where I can get it and so he gives me a chance.”

Boyes said the success of the tandem is partly based on their pure talent.

“Jordan is a talent. Kevin just has to get the ball in a spot where Jordan can get it,” Boyes said. “Sometimes there is a chemistry that gets developed.”

As for the opponent this weekend, Alfred University is 3-1 on the season and coming off a 27-22 win against Morrisville State College.

Boyes had high praise for Alfred, calling the game this weekend a great test for the Bengals.

“Alfred is a very well-coached, good football team. They’ve been in the playoffs for I don’t know how many years in a row,” Boyes said. “Last week’s game, great outcome and some good play. So this will really tell us kind of where we are in terms of growth as a young team.”

Evert was visibly excited when asked about the game this weekend.

“I’m very excited, I can’t wait for it,” Evert said with a smile.