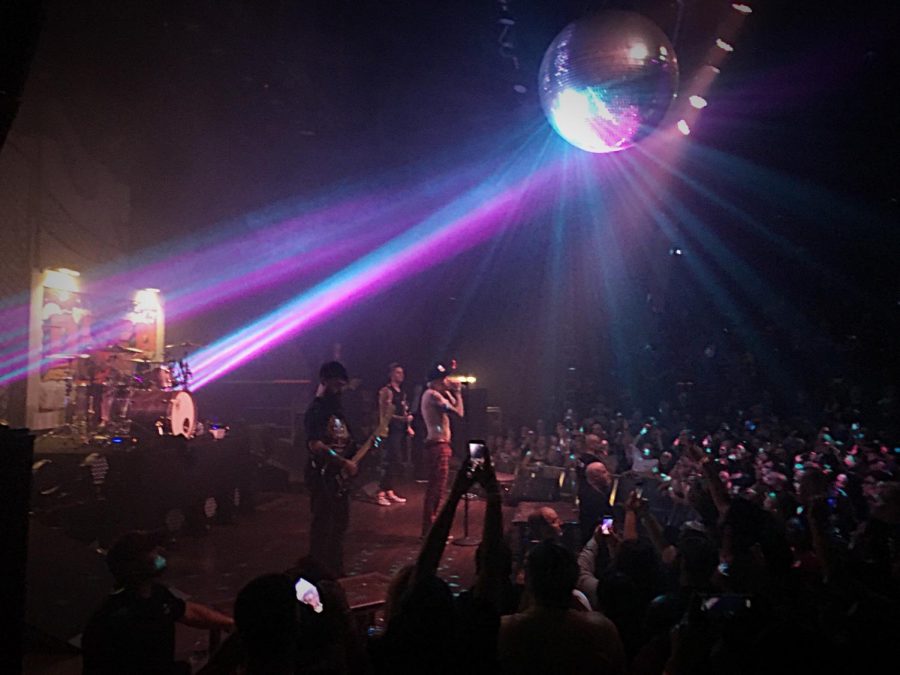 This past Tuesday, Neck Deep played a headlining show to a nearly sold-out crowd at the Town Ballroom to promote their latest release, “The Peace and The Panic.” On this tour, the band played cities they weren’t able to catch on the first half of the American tour.

They were formed in 2012 by Ben Barlow (vocalist) and Lloyd Roberts (previous lead guitarist) in a town based in Wales. Their name comes from the song “Boom, Roasted” by an influential pop-punk band called Crucial Dude.

The show started off with WSTR, a newer pop-punk band on the rise that originally grouped together in 2015. In this day and age, there have been a lot of bands making a statement by removing vowels for their name. WSTR was originally named ‘Waster,” but then got issued a cease and desist letter from a Canadian band with the same name. To keep the band name as close to the original as possible, they went by WSTR.

Like Neck Deep, the band is also based in the United Kingdom and signed to Hopeless Records. The group played songs from their recently released second album, “Identity Crisis.” along with older hits from “Red, Green, or Inbetween.” A good portion of the crowd knew all of the words to all of the songs they played and kept it rowdy. For an opening band, there had been a lot of crowd surfers and fans who had waited a long time for them to play in the United States.

The next band on the bill was a female fronted band, Stand Atlantic. The three-piece from Sydney Australia started off in 2014 and consists of vocalist/guitarist Bonnie Fraser, bassist David Potter and drummer Jonno Panichi. This was the band that caught the crowd’s attention the most. This music scene is so male-dominated that it can be hard for bands with women in them to get a shot at stardom. It’s great that popular bands like Neck Deep are bringing this type of diversity onto their tours, hopefully sending similar artists a message. Before this tour, the band has gotten their name out by touring with State Champs, Cute Is What We Aim For, and New Found Glory.

Trophy Eyes, another Australian band, set the stage for Neck Deep. The band has put out three full-length albums, one of which being “The American Dream,” released in August of this year. The band has been on Warped Tour in 2015 and toured with big names in the scene like Knuckle Puck, Knocked Loose, and Movements. Their set consisted of lots of crowd surfing, and a mixed setlist of new songs like “More Like You,” “You Can Count On Me,” and singles from their second album, “Chemical Miracle.” Trophy Eyes played Buffalo in winter of last year to a very small crowd due to the weather, the fans made up for it at this show.

Finally, it was time for Neck Deep to take the stage and their setlist had fans in shock. The band played songs off of their latest release, “The Peace and The Panic,” along with other popular singles off of “Life’s Not Out To Get You.” Like most sets earlier, crowd surfing and mosh pits consisted throughout the whole performance, even the heartwrenching ones. Vocalist Ben Barlow heavily encouraged crowd surfing, and even gave fans the microphone when close enough to the stage. To everyone’s surprise, the band pulled out old songs such as ”I Couldn’t Wait to Leave 6 Months Ago” and “What Did You Expect?” from their first EP, “Rain In July.“ In the middle of their set, the band threw in a cover of Natalie Imbruglia’s “Torn.”

Neck Deep covered this song for Hopeless Records compilation titled “Songs That Saved My Life,” which is due out November 9th.  According to Katy Cooper, who is a part of their publication team, the compilation includes covers from additional bands like Against Me!, Taking Back Sunday, Dan Campbell and Ace Enders, Movements, The Maine, Dance Gavin Dance and more. Songs That Saved My Life looks to engage current artists with cover versions of those songs and share those stories with the world. This project benefits a variety of mental health and suicide prevention organizations. Currently, this project benefits Crisis Text Line, Hope For The Day, The Trevor Project, and To Write Love On Her Arms.

Fans had been waiting to see Neck Deep play the Western New York area for a very long time and left the event more than pleased with how their evening went.