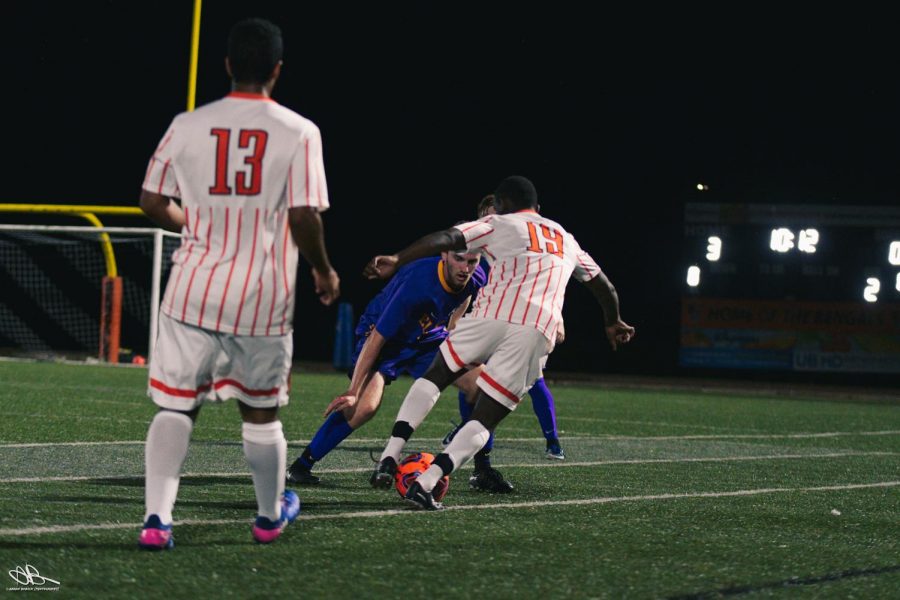 A Bengal red card at the end of regulation was all the Brockport Golden Eagles needed as they came away with a 1-0 overtime win over the SUNY Buffalo State Men’s Soccer team Saturday afternoon.

The loss caps off a rather unjoyful Homecoming weekend for the Bengals after tying Geneseo Friday.

After starting out the season 5-0, Buffalo State has fallen into a cold streak going 1-3-1 since as they entered SUNYAC play.

Saturday’s tilt with Brockport was a physical, defensive struggle in which a total of eight cards were drawn, two of which went to freshman Ramazani Juma, forcing the Bengals to play with only 10 men in the overtime period.

Brockport took advantage as Alex Giordano found Matt Stefaniw for the game’s only score on a breakaway with 2:17 left in overtime.

“We have a lot of young guys on the squad so they’re getting used to how hard it is to compete in this conference,” Buffalo State coach Francesco Cardillo said. “It’s just staying focused through the 90 or 110 minutes throughout the game, not getting into it with the other team or the refs.”

Junior midfielder Ali Shawish had the most chances to score for the Bengals with a team-high three shots on goal. Shawish’s best chance came just seven minutes into the contest. He took a shot from five yards away that went off the goalkeeper straight up falling near the goal line before being headed away by a defender.

Brockport had a 2-on-1 opportunity later but Giordano’s pass was off the mark and Buff State midfielder Nemanja Simic knocked the ball away.

The Golden Eagles had a prime chance to score with 24 minutes left in the game when Jason Hayes’ shot went behind net-minder Andres Queen but his Stefaniw was unnecessarily offside.

Queen made a brave breakaway stop by coming 30 yards out of the net to kick the ball away.

Senior Jake Ferry had a header go just above the crossbar late in regulation.

In the 89th minute, Juma was given his second yellow card of the game forcing the Bengals to play a man down.

Despite the giving up the one goal, Queen was strong in net Saturday making seven saves. The goalkeeper has been big for the Bengals so far this season registering four shutouts and putting up a .64 GAA through nine games.

Things don’t get any easier for Buffalo State moving forward. They have a quick turnaround with a non-conference game at Grove City on Tuesday. Saturday the Bengals renew their “Battle by the Lake” rivalry with a 1 p.m. kickoff against Fredonia, who lost to Brockport on Friday and beat Geneseo on Saturday.

“We need to just work and continue to compete and get after it,” Cardillo said. “Now we have to get our mindset ready to take on Grove City.”