Familiar face at the helm for Men’s Soccer 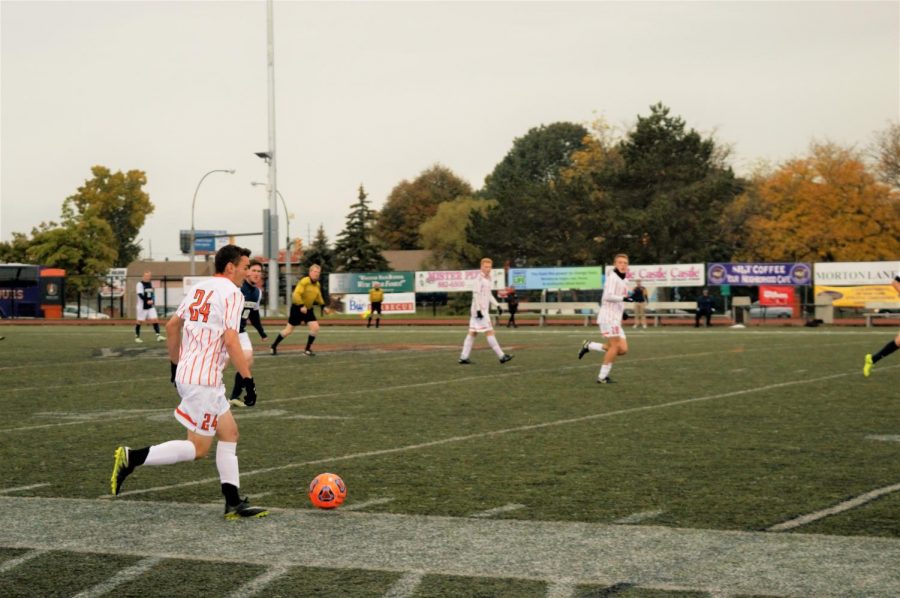 For the first time in half a decade, there will be a new head man for the Buffalo State Men’s Soccer team.

Shocking news struck the Buffalo State men’s soccer program in late July when coach Mark Howlett, who spent the past five years turning the Bengals from a one-win to a nationally ranked team, stepped down to take the same position at SUNY Geneseo due to personal reasons.

After spending a year as a top assistant to coach Nick DeMarsh on the Women’s Soccer staff, Cardillo had spent the last two seasons as an assistant to Howlett.

After transferring from SUNY Canton in 2013, Cardillo donned the Buffalo State kit for two years. The midfielder earned All-SUNYAC honors and helped the Bengals claim 15 victories in his two seasons.

“I’ve been with coach Howlett for a long time, as a player and as an assistant,” Cardillo said. “When he told me the news, it took a little while to sink in, but on the other side of it, I was ecstatic to be taking over this program. I feel like I’ve got a lot invested in it. Leading this team as a head coach is something I’ve always wanted to do and I look forward to this opportunity that has been giving to me.”

The players were taken aback as well.

“I was shocked. I was very close with coach Howlett, he was a big reason why I came here,” said senior central midfielder August Finn, who will don the captain’s band this season. “I have the most faith in coach (Francesco) Cardillo. He’s been here just as long as Coach Howlett.”

The Bengals are coming off a 14-3-3 overall record, 6-0-3 in SUNYAC play. Entering the SUNYAC tournament as the third seed, the Bengals were upset at Coyer Field by the Geneseo Knights, 2-0.

Their regular season record was enough to get them a berth the NCAA Tournament, for the first time in over 30 years, but fell in the first round to the Hobart Statesmen.

The Bengals will face their former coach when on Sep. 28 at 4 p.m. when the Howlett and the Geneseo Knights come into town.

“We definitely learned how to win,” reiterated senior goalkeeper Andreas Queen, who is expected to return as the starter for a second straight year. “All the returning guys know the grind preseason takes on the body, so we want to have the new guys understand that toll.”

“There are a lot of guys returning who that had an impact on the team on different levels, which is always good,” Cardillo said.

Of course, with a new season approaching, it means a few familiar faces depart. The Bengals have lost many key players including midfielders Sammy Wasson and Barak Benyehuda, left-back Devonte Black and striker Luke Pavone. That quartet amassed a combined 28 points.

“Obviously, those players are very good players. They were all very important to the team in their own specific ways,” Williamson said. “But the new, young guys here can do the job.”

After the players moved in on August 16, they had a number of meetings the following day and camp started on August 18.

The Bengals are slated to kick the season off this weekend at Coyer Field against the Elmira Golden Eagles on Friday at 7 p.m and on the Medaille Mavericks Saturday at 7 p.m. as part of the Buffalo State Fred Hartwick Classic.

They will open SUNYAC play on the road this season as they will travel to Oneonta to square off against the Red Dragons on Sep. 21 at 4 p.m.

The Bengals will close out SUNYAC play at home against the Plattsburgh Cardinals on Oct. 20 at 1 p.m. and finish the regular season at Coyer Field as the Alfred Saxons make a trip to Buffalo in a non-conference matchup on Oct. 23 at 7 p.m.

The SUNYAC tournament is slated to start on Oct. 27 with the conference champion being crowned on Nov. 3.