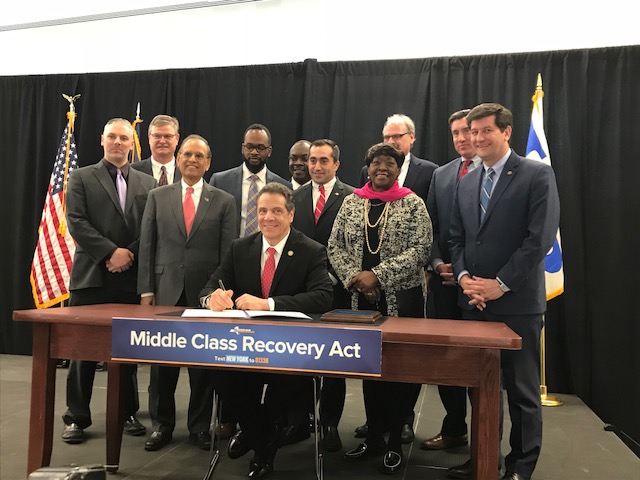 Governor Andrew Cuomo continued his crusade for the middle class on his first trip to the Queen City this year by signing the Middle Class Recovery Act on Thursday.

After a press conference with many local leaders at the University at Buffalo’s Downtown campus, Cuomo inked into law a continuation of a phase-in tax cut directed at the middle class. Individuals and families with an income between $40,000 and $150,000 a year will receive close to a one percent tax cut, when it’s fully phased in.

In a press release from his office, the governor made it clear that this is part of the state’s response to the new Federal Tax bill, which Cuomo believes will hurt many New Yorkers.

“At a time when middle class New Yorkers are facing growing challenges and rising costs, New York is reducing their tax burden and investing in jobs, education and opportunity for all,” Governor Cuomo said. “The Middle Class Recovery act continues to create a path forward for those striving to get ahead in Western New York and across the state, building a stronger, brighter New York.”

According to the Cuomo’s office, by 2025 the new lower state tax rates will save middle class New Yorkers $4.2 billion annually.

The act also officially put forth the second phase of the Excelsior Scholarship program, which allows New York state middle class residents to attend any SUNY or CUNY school tuition-free. The second phase raises the program’s cap for household incomes from $100,000 to $110,000. The cap will reach $125,000 when fully phased in.

The governor also announced that $32 million had been approved for the Innovation Hub, part of phase two of the Buffalo Billion. The grant, approved this afternoon by Empire State Development Board members, will look to help new start-ups and bring entrepreneurs to the region.

Much of the money will be aimed toward funding new research and technologies developed by the local medical industry including University at Buffalo, Hauptman-Woodward Medical Research Institute, Roswell Park Comprehensive Cancer Center, Kaleida Health and the Jacobs Institute.

“Upstate New York was not in the economic game for so many years,” Cuomo said. “They weren’t getting any funding from Albany. The Buffalo Billion is all about saying that we’re going to compete for jobs. To be in the game for jobs the state is going to have to invest.”