Politics is a hot button issue, but can we talk about something else 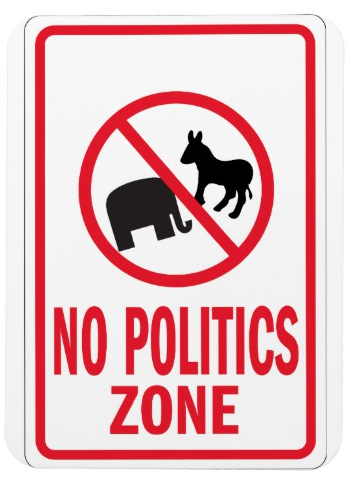 Acclaimed academic Tariq Ramadan once said, “You can’t say that I don’t do politics because silence is a political statement.” Now more than ever, silence needs to be the one thing in life that doesn’t involve politics.

Instead, all people needed to do was watch his reality show, The Apprentice to see what the New York real estate developer was up to. No one had to care about politics as much as they do now. In fact, the country has spent the last two years worrying about politics and where has it gotten us?

While the presidency of Donald Trump has been beneficial in exposing some of the more corrupt and biased points of politics, economics, and journalism, to mention a few areas, he has also blinded this country to some of the other cultural events around it.

Politics has invaded everything, spreading more like a poison in the bloodstream to say the least. Facebook and other social media websites have become war zones of political commentary with unsuspecting media goers looking to see how our friends are doing.

Many social media feeds are littered with the fatally wounded and those who have been unscrupulously attacked by the onslaught of news articles, insulting comments or even the harmful wit of those they know.

During Spring Break, I finally did something, I hadn’t done in months, go too the movies. I finally saw Black Panther and Isle of Dogs. Honestly, I can say that both of these movies were great because they have a watchable charm about them, but they still harped back to current social issues.

That same week, on CBS Sunday Morning, comedian Jim Gaffigan did an editorial about ”that topic” and how he was tired of everyone talking about it. That’s the sad truth about it is that politics has become something that people base many elements of their lives around now.

Being in this current political climate, is like being Elaine in the season five episode of Seinfeld, The Couch. Throughout the episode, Elaine goes about basing her relationships and going to certain businesses based on the stance of abortion. This is how politics has changed this country.

While some people might have been doing this before Trump was elected, he’s made it more severe. Something that I recently looked into was the number of politics related stories that were showing up on my news app, Flipboard. Just for one day, there were thirty-one stories related to politics and hardly any of them said something different.

One of the few news outlets that still give people a varied source of information is Vanity Fair. While this magazine focuses on political issues, they are not the central focus of any issue. This magazine still talks about Hollywood and entertainment, other interesting goings on in the world, and not so well known stories of the world around us.

For radio listeners, the show that I often listen to that does feature political jokes but other news stories as well is NPR’s news quiz, Wait, Wait… Don’t Tell Me. Armed with razor sharp wits and a variety of strange news stories this show always remains interesting because it’s not all about politics.

Moderation is probably what could work best, but sometimes it does seem better if we cut politics out of our lives for a while. In a story from The New York Times’ Style section, one man did it since the election in 2016 and hasn’t looked back.

The Man Who Knew Too-Little, tells the story of Erik Hagerman, who swore not to learn about the goings on of America from November 8, 2016, but this was only supposed to be an experiment that lasted a few weeks. He still remains oblivious to what has happened since that night. He doesn’t know about many of the events that have been surrounded in political arguments or social media based disagreements.

Perhaps this is what many of us need, a political detox.

Instead of cutting ourselves off, we should learn how to moderate our daily, weekly, or monthly intake of politics related information. Sometimes, ignorance can be bliss. However, this is easier said then done as many television shows are politically charged, though they don’t have to be.

Saturday Night Live was known for their political jokes but they just kept on going. At one point, it grew to be sickening because a comedic institution such as SNL was basing its entire reputation on how well they could dive into the ring of political commentary. Television shows such as Will & Grace and Roseanne have come back based on their ability to remain as controversial as they were when they were originally on the air.

After a short election PSA called #VoteHoney, the always quirky NBC sitcom, came back based on their political perspective, but for everything about the left, there must be something for the right. You really can’t argue that this show came back because of its comedy. Since then the show has been renewed for two additional seasons, that will be just as charged as the first revival season is.

Many other shows are aimed at making jokes about Donald Trump and other politicians, but aren’t concerned with the comedy or plot related value. However, for everything that goes to the left, something must go to the right.

ABC’s once hit sitcom; Roseanne has become something entirely strange from the original incarnation because it is one of the only shows on the air at this moment to feature a right-wing perspective. However, the revival is not the Roseanne that television watchers remember from years ago… or reruns on Nick at Nite.

So many people spend their time with their eyes glued to their screens, wondering what the latest political news will be. Perhaps it would be best if we just stopped talking about it for a while.

Instead of talking about purely politics or the way a show revolves around political commentary, couldn’t we just watch something that is genuinely interesting and not so concerned with the man with the funny hair. It’s times like this where the sudden phenomena of everyone re-watching The Office, makes sense. People need a show that goes away from having to listen to the tiresome and non-stop onslaught of politics related news, comedy, dramas, etc.

So, instead of reading that article about the latest thing that will supposedly get Trump kicked out of office, skip it and look for something new to read. A good book or pick up a magazine. Believe me, there will be another story written about the same thing in a few hours.