With a bold new name and new events, Buff State Con is a hit once again 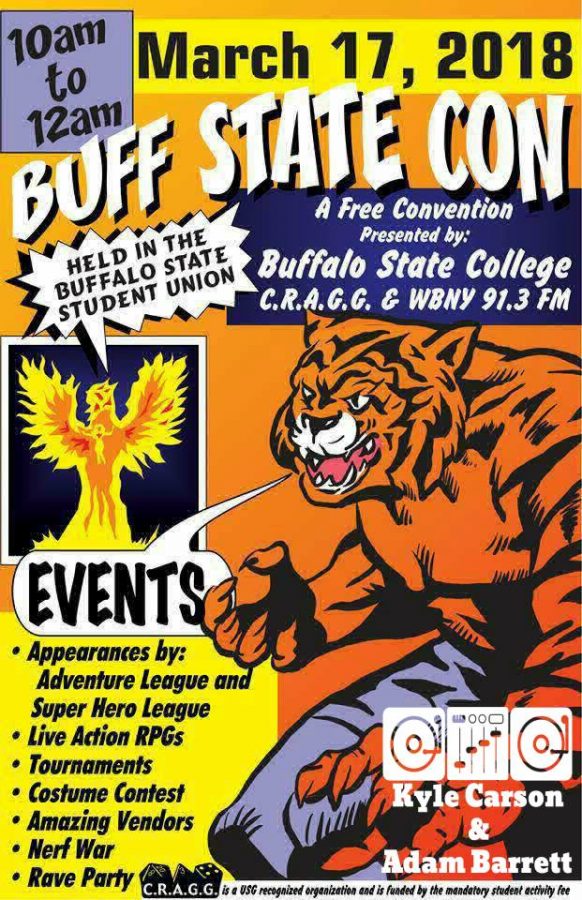 Buff State Con poster with a new design to it

For many, Saturday was St. Patrick’s Day, but for the anime and comic book buffs, Saturday was Buff State Con, held by C.R.A.G.G, Campus Role-playing Anime Gaming Group. In previous years, this event was called Craggnarok but was changed, much to the chagrin of previous alumni. However, this year’s event was lampooned by two other comic-cons going on, so not as many vendors could attend as in years past.

In addition to the usual events going throughout the day, a costume contest, panels on different video games/anime, and round the clock video game tournaments, this year’s con had a Maid Café going on from 2-4, a Nerf War in the Social Hall (it’s usually held in Bulger), and a rave to round out the entire day. WBNY DJed the event, bringing in great songs, with both mainstream as well as alternative music, bringing in artists that aren’t usually found on a DJ’s playlist.

The winner of the costume contest was Rosa Moseman as Raven from the original Teen Titans series. Second place went to Haley Soda for her Maid Tsu costume. Prizes were Amazon Gift Cards valued up to $50.

Are from the fun going on, the only disappointing part of this years convention are due in part to the other events going on around Buffalo and in Toronto. Usually the vendors that are there such as The Collector’s Inn stay until the end of the con, but most of the vendors left by 5:30pm.

President of Andre Simms discovered that despite some initial snafus this event was a success for the organization hosting the convention under its new name.

“Well all in all I think it went really well. We had 300+ people come to the convention, setting a record for a CRAGG event and almost doubling the attendance from last year. Granted we have a laundry list of ideas we didn’t get to implement this year and of course it didn’t go perfectly according to plan.

But overall it was a good jumping off point, we really want Buff State to grow in the local convention scene, this was a good start and set up next year with a solid foundation. I couldn’t be happier with my team and all of our members who helped out. At the end of the day the only reason CRAGG is so great is because of its members, they really are what makes running the club worth it. 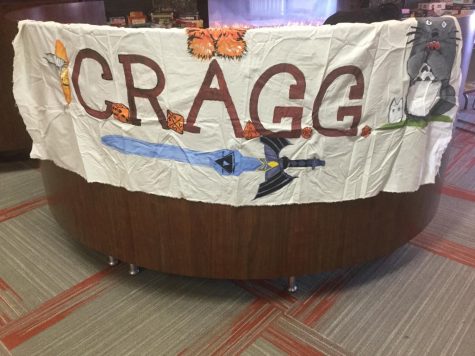 I can’t wait to see where we are going to take the convention in the future, but I’m excited to see if we can break our new goal of 500 next time.”

As the day went on, the Maid Café served as a great place to relax and catch up after an exciting day. Originally thought of as a Tea Room held earlier on in the day, this café was a real treat. I gave it 5 stars on Yelp. Serving a variety of teas, cookies, cakes and even some St. Patrick’s Day themed items, this was one of the highlights of the day.

At the end of the day, the Nerf War brought together many of the people who attended the con’s other events. Someone brought a child who was the unfortunate victim of a few headshots but he was fine. The final event of the day, the rave, was sparsely attended, but the music, DJed by Club Marcella’s, sounded pretty good.

While some people liked the new event as well as its new name, others didn’t share the same enthusiasm Vice President of Gaming Victoria Herecki knew the event was good despite initial criticism.

“Well it was record breaking and even though we had a lot of set backs conflict and negative comments we pulled through and created something everyone enjoyed.”

For anyone looking to take part in CRAGG’s weekly events, they hold anime and game nights on Tuesday and Thursday in Bacon Hall at 8pm. Next year’s con is already being planned and will feature newer events and work on some of the events that didn’t go over as well this year.