Race remains vital factor in how we treat drug epidemics 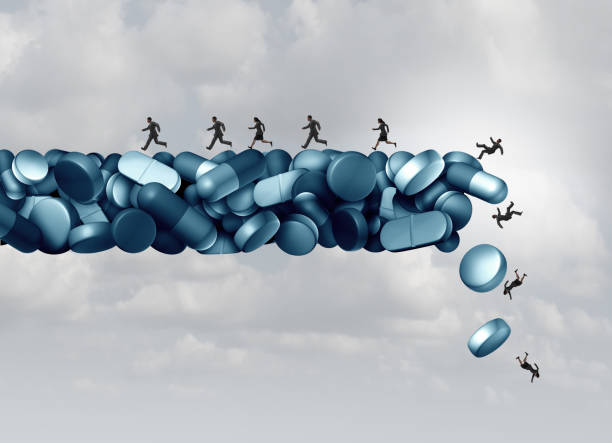 The 1980s were a rough time for New York City. Gang violence was on the rise; the crack epidemic was killing black communities, and just going outside meant risking your life.

Ronald Reagan was the president at the time and his wife, Nancy, came up with a campaign to possibly get the drug epidemic to stop, and maybe bring peace to those communities affected by it. Her campaign was Just Say No; three simple words that are on par with Marie Antoinette’s supposed aphorism, “Let Them Eat Cake”.

Neurology and brain chemistry have something to do with just how drug epidemics manage to spread around like this. Drugs such as crack influence/stimulate dopamine, which is active when people feel a sense of pleasure. One important thing to remember is that pleasure and happiness are not the same thing when it comes to the brain.

In the brain, there are two different chemicals that influence pleasure and happiness. More often than not, people experience brief moments of dopamine-induced pleasure followed by a flush of cortisol, which induces stress, based sadness.

A factor that isn’t considered in the brain is the long-standing influence of serotonin, which makes people feel happy. Drugs such as crack and heroine are considered “uppers” which stimulate the dopamine receptors in the brain more. As people keep using these drugs they chase that sense of euphoria.

The way the crack epidemic was dealt with in New York City was by instilling the Rockefeller Drug Laws, named for then New York State Governor Nelson Rockefeller. What these laws basically dictated was, if any amount of illegal drugs or substances was found on your person you received a lengthy jail sentence that many people are still paying for.

Filmmaker Ava DuVernay’s documentary, 13th, touched upon how this played an important role in the mass incarceration of young black men, who were involved in the epidemic by either selling or buying crack, or being involved in gang related shootings and other gang related incidents.

While neighborhoods were being destroyed, areas like The Bronx were in shambles. Buildings were burned, destroyed or were shrouded in rubble. The New York City Subway System was covered in graffiti and spread crime like a poison in the bloodstream.

As the Rockefeller Laws took effect, though, the streets were slowly cleaned up and a federal bailout eliminated the city’s crippling debt, which gave us the picturesque New York City people have come to know.

Now, the country is suffering through another drug epidemic, opioids. People are slowly feeling the effects of this but they are adverse to those effects of the 1980s crack epidemic. One thing to note is hat crack is an upper, while opioids are considered downers.

However, rather than face harsh punishments, people are encouraged to get help and seek rehabilitation whereas in the 1980s people were just sent to prison and left to rot. Though crack is an illegal substance, opioids have two different sects, which make this a bit different than in the 80s. Heroine is an illegal substance but medical physicians have prescribed some opioids, like oxytocin.

Despite this epidemic also effecting black communities, according to an NPR report, this epidemic is predominantly white. This is only backed up by TIME magazine’s special report on the opioid epidemic, which shows photos of addicts, first responders and other people involved in the epidemic. All white.

The photos show just what the demographic of this epidemic has been effecting but that at the same time how this epidemic is being dealt with. None of these photos involve prisoners and none of them involve someone who is facing a jail sentence.

Drugs have now collided with America’s ongoing epidemic with race relations. The election of Donald Trump has noticeably pushed race relations back to the days when the film The Birth of a Nation (1915) was celebrated and trees bore the “strange fruit” that Billie Holliday famously sang of.

Though people should seek treatment for being addicted to opioids, why wasn’t this advice given to people suffering the effects of crack in the 1980s?

Instead those people were told to “just say no”, as if that really means something. Crimes such as gang violence and murders are punishable offences and while using drugs is illegal, both races shouldn’t be discriminated against based on race.

Coverage of the heroin/opioid epidemic has primarily been about how to prevent this from growing and to keep people from going back to such substances, but it’s a pipeline. As one of the interviews in the special TIME magazine report says, “instead of refilling a 50-dollar prescription for opioids a person can pay 5 dollars for a tab of heroine”. With newer chemicals being infused into drugs, getting high becomes something like an addictive pain.

Growing up I lived in Massapequa, which is on Long Island in Nassau County, but I was closer to the border of Amityville, which is in Suffolk County. As I later learned, the school district I would have gone to otherwise is notoriously bad. Of course, the reputation and thoughts of the school district can often speak before anything else. Much of the reason that it is considered bad is because it is predominantly black.

However, the Massapequa School District is not better either. Despite seeming great on the outside, the school district’s central high school has always had a problem with drugs, particularly heroin. This was never something that was based on rumors, but was based on factual newspaper stories as well as students talking about people abusing heroin within the school.

Either way it was a decision between a lethal injection and a firing squad. However, many people are usually quite wrong about the Amityville School district because they don’t give it a chance and only listen to the rumors.

During my life, living on Long Island, the outer towns of Suffolk County were usually in the news every week from reports of heroine overdose or other lethal drug related deaths. This area of Long island holds more than a million white residents, 68.3 percent, according to Data USA’s demographics of Suffolk County.

While this epidemic has been harmful to many around the country, one missing statistic about this epidemic are statistics on crimes committed to opioid addiction.

Searching for statistics on crime for this epidemic are hard to come by because this epidemic seems to kill more people. An article from CNBC shows a new means of fueling a drug addiction via gift card fraud.

Of several people interviewed about this, one woman responded, acknowledging that you do whatever it takes to secure that next fix. The article says, “When you’re suffering from addiction, any length means any length,” said Kristen Booth, 23, who has been arrested twice for retail return fraud in connection with gift cards.”

Again, the people shown in this article are all white women. Not saying this epidemic has a gender bias to it, but there is definitely a race angle to this. One could inevitably argue that the opioid crisis is based on how we learned to treat the crack epidemic of the 1980s but black people are still undergoing mass incarceration rates because of drugs.

Despite marijuana becoming a positively thought of social drug, black people are still going to jail at rates that are not equivalent to the number of whites. According to a criminal justice fact sheet from the NAACP, blacks were sentenced under crack cocaine laws more despite Whites and Hispanics being a majority of users.

They write, “In 2002, blacks constituted more than 80% of the people sentenced under the federal crack cocaine laws and served substantially more time in prison for drug offenses than did whites, despite that fact that more than 2/3 of crack cocaine users in the U.S. are white or Hispanic.”

America isn’t firm on the foundations of race relations and hasn’t been throughout its entire history, but this epidemic shows just what type of person is considered a priority when it comes to drug treatment.