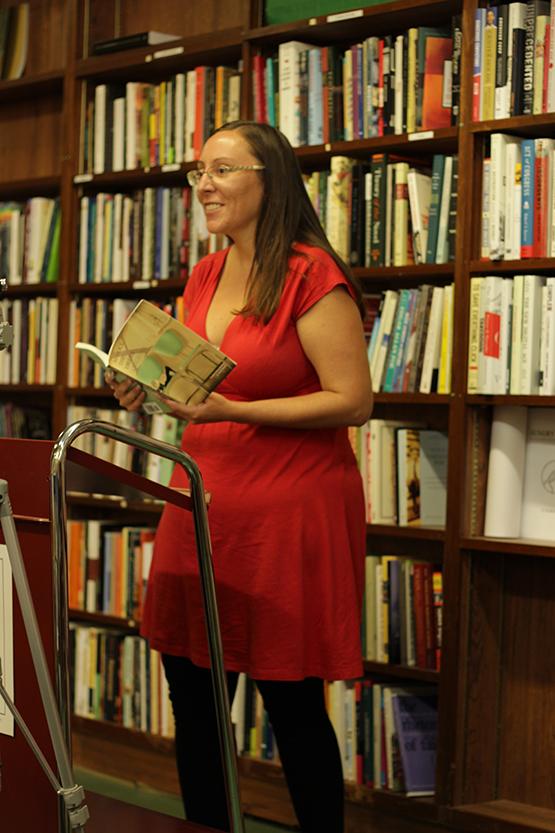 Friends, members of the surrounding community and area students all gathered at Talking Leaves bookstore on Main Street this past Wednesday. They weren’t there to browse the books, but rather to examine one in particular.

X Marks the Dress: A Registry is the latest collaborative effort of local professor and student, Kristina Marie Darling.

Darling, originally from Missouri, is a composition instructor at SUNY Buffalo, where she is also working toward her Ph.D in poetics. She moved to the area in 2012 after fellowship residencies at the Vermont Studio Center and at Yaddo in Saratoga Springs. She also reviews books for publications, including The Boston Review and The Colorado Review.

In the back of the store, an opening between bookshelves was filled with chairs and a podium. This would be the stage for Darling’s poetry reading, along with two other local authors.

The night did not go according to plan. Carol Guess, co-author of X Marks the Dress, was scheduled to read along with Darling, but could not make the trip from Washington state due to lack of funding. Instead, Buffalo State English professor Peter Ramos and BlazeVOX publisher Geoffrey Gatza read some of their pieces as well.

The scenery and weather of the Queen City have provided inspiration for some of Darling’s works, specifically a recent BlazeVOX release titled “Brushes With.”

“There’s a poem called ‘Antarctica,’ and I always tell people that that’s about looking out my apartment window in January,” Darling said. “It was really cold.”

Darling appreciates the scenery of Buffalo, but takes in different scenes through travel, which she usually sets aside time for in the summer. Her favorite travel experience thus far as has been to Scotland, where she spent her stay in a castle.

“I was just so impressed with the architecture,” she said. “I thought it was just breathtaking.”

Come Oct. 10, Darling will make a cross-country trip to Bellingham, Wash. to meet her collaborator face-to-face for the first time. They will read at Western Washington University, where Guess teaches courses in creative writing.

“In some ways, it’s really nice that we haven’t met because I don’t have any preconceptions of her,” said Guess.

Dialogue between the two started a year and a half ago, when Darling reached out to Guess to help promote a book she was working on at the time, titled Melancholia (An Essay).

She emailed Guess, asking her to write about it on her blog, “Syntax Is A Second Skin,” where she features her own works. Guess complied with the request. The two then exchanged books and came to love each other’s works. The rest is history.

The two are in the process of writing another book together, titled Instructions for Staging. Both enjoy the collaborative process, which they have engaged in with other authors as well.

“I’ve really gotten addicted to it,” said Guess. “If I get stuck, there’s someone there to turn to.”

Darling must feel the same attraction to the process, as she is currently working with photographer and costumer Max Kaplan on a piece tentatively titled “Music For Another Life.”

As Kristina read poems from X Marks the Dress, she allowed the Talking Leaves audience to experience the work differently than how they would if they read it themselves.

“When you hear a poet read, the way that they read their work is so much different that what you would imagine,” Darling said.

In the first section of the book, the poems alternate between the voice of a husband and wife, and are titled for items one would find on a bridal registry (“Cups and Saucers,” “Crocheted Tissue Box Holder,” “Champagne Flutes,” “His and Hers Key Rings” and “Gift Certificate from Victoria’s Secret.”)

The book wraps up with “What Survived the Fire.” In this section, the two authors actually erased each other’s poems, creating a whole new one. On the last page, there is only one character left.

“Carol did that erasure,” Darling said. “She erased everything except the X, and the footnote at the end talks about the wedding dress, and wedding falling apart.

“So, that was where the title came from.”

As the event came to a close, the audience smiled and granted a generous applause, grateful to have been given the opportunity to share in the intimate experience. Darling smiled and clapped along.

“It’s a good opportunity to present your work to readers exactly as you have envisioned it,” she said.

Samantha Wulff can be reached by email at [email protected] or on Twitter at @WulffSamantha.