Women’s Hockey gets revenge on Cortland, 3-2 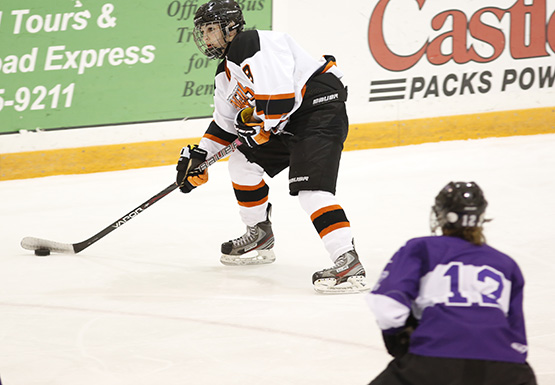 Down one-goal with 2:20 to go in the second period, SUNY Buffalo State Women’s hockey senior Brooke Krantz was hit in the head from the behind by a Cortland player.

Whether or not the hit was intentional, it certainly sent the Bengals into a rage.

Senior Erin Gehen quickly made her way to the Red Dragon bench and had to be held back by classmate Emma Ruggiero.

“I wasn’t going to hit (the Cortland player),” Gehen insisted afterward. “I didn’t want to get kicked out of the game, but I was really mad. You don’t ever want to see your teammate get hit like that.”

The Bengals wanted payback, but they didn’t care do it by cheap shots. They desired a much sweeter form of vengeance.

“A teammate gets hit from behind and it changes the game,” Ruggiero said. “You’re not head-hunting you just want to make it hurt and the only way to do that is to make hurt on the scoreboard.”

So, Buffalo State came out with a thirst to hurt the Red Dragons on the scoreboard with a come-from-behind 3-2 victory Saturday afternoon.

At the second intermission, the Bengals came together and realized they needed to get out of their heads and play the game.

“We had a good heart to heart in the locker room and realized that we weren’t going to get the calls today,” Buffalo State head coach Jennifer Wilson said. “We told them, ‘just play your game and continue to connect on passes. That’s why it ended with us on top.”

Buffalo State was unable to score on the five-minute major penalty that continued into the early moments of the third, but the tide had certainly begun to turn in their favor.

The Bengals picked up another power play a few minutes when Claire McCarthy went to the box and this time they cashed in.

Cheyenne Matson sent the puck across to Ruggiero who tapped it in.

Buffalo State went into jubilation as the goal affirmed that they were getting the payback in the correct fashion.

“I jumped up and down,” Ruggiero said. “But as soon as everyone was around I looked around and was like, ‘we’re not done, we need one more’.”

Gehen got there one more three minutes later and skated with zeal back to her bench.

The Bengals clinched a home playoff game Saturday, which was the cherry on the top of their Senior Day game.

“It was really awesome to have the seniors do great today,” Wilson said. “It’s fun when the fans are in the stands. I’m happy for the seniors.”

The Red Dragons got the board in the first period as Buffalo State let in a rare goal on the penalty kill. Cortland crowded the Bengal net and Miranda Kolb poked it in.

Buffalo State came back two minutes later as Caitie Horvatits scored on a backhand shot that went 5-hole on the Red Dragon goalie to tie the game at the break.

Cortland took the 2-1 lead on their fourth power play of the day as Kirsten MacDowell tipped in the blueline shot from Samantha Pippin with 15 minutes left in the second period.