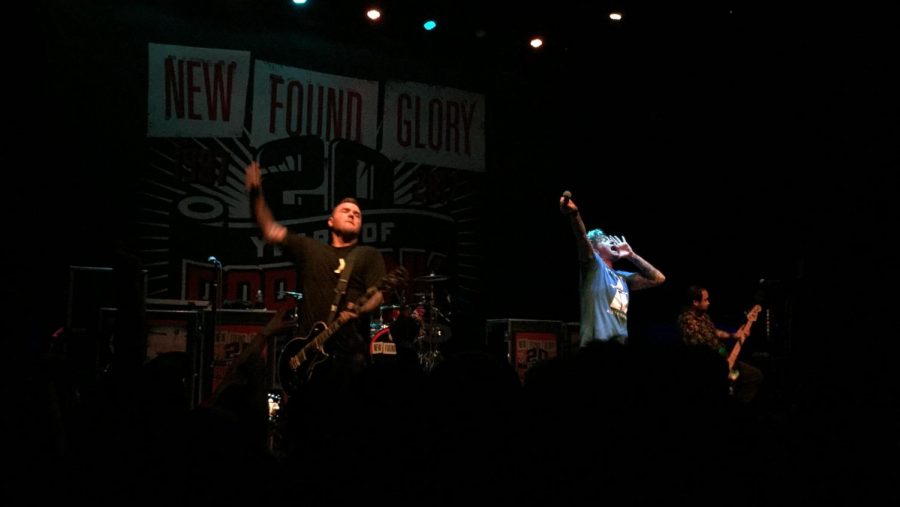 Legendary pop-punkers New Found Glory celebrated 20 years of music to a sold-out crowd at the Town Ballroom on Friday night.

If you went to the Town Ballroom on Friday night at 681 South Main St., you witnessed one of the greatest pop-punk bands of all time playing two of their classic albums in their entirety to celebrate 20 years as a band.

Legendary pop-punkers New Found Glory formed in Coral Springs, Fla., in 1997 and had one goal in mind: playing shows outside of the Sunshine State. After completing that goal, the new goal was to keep NFG going as long as they could. Fast forward 20 years later and it’s safe to say there’s no signs of stopping. The band composed of vocalist Jordan Pundik, bassist Ian Grushka, guitarist/vocalist Chad Gilbert, and drummer Cyrus Bolooki has basically remained the same since forming except with the departure of rhythm guitarist Steve Klein in 2013 after he was charged with “lewd conduct with a minor under the age of 14” and child pornography. Since that incident, the four-piece continued on, releasing two albums on Hopeless Records (Bayside, Hold Close, The Dangerous Summer). Their newest album “Makes Me Sick” came out earlier this year.

New Found Glory started off their show with a video showing off old and current memories that the band has had so far during their 20 years. NFG then walked on stage and opened with “Understatement”, the first song off their 2002 album “Sticks and Stones”. The band played the rest of “Sticks and Stones” which featured the singles “My Fiends Over You” and “Head on Collision”. They also played all of their self-titled album which features classic songs like “Dressed to Kill”, “Boy Crazy”, and “Hit or Miss”. Not only did they play all of “Sticks and Stones” and “New Found Glory”, they played two tracks off of “Makes Me Sick”, which were “Party on Apocalypse” and “The Sound of Two Voices”.

You could clearly tell the audience was having the time of their lives, reminiscing of when they heard those songs nearly 20 years ago. Mosh pits and crowd surfers were everywhere on the floor of the venue. Some people lost their phones and glasses in the pit (they eventually recovered them) and I even had my phone knocked out of my hand trying to snap pictures (the screen protector failed me).

Overall, the show was remarkable and was probably one of NFG’s best shows to date in the area. The last time they came to Buffalo was in 2014 as part of the 5th annual Glamour Kills Tour with We Are the In Crowd, Fireworks, and Candy Hearts. The next date of their 20th anniversary tour is Sunday, November 5 at the Rex Theater in Pittsburgh, Pa.