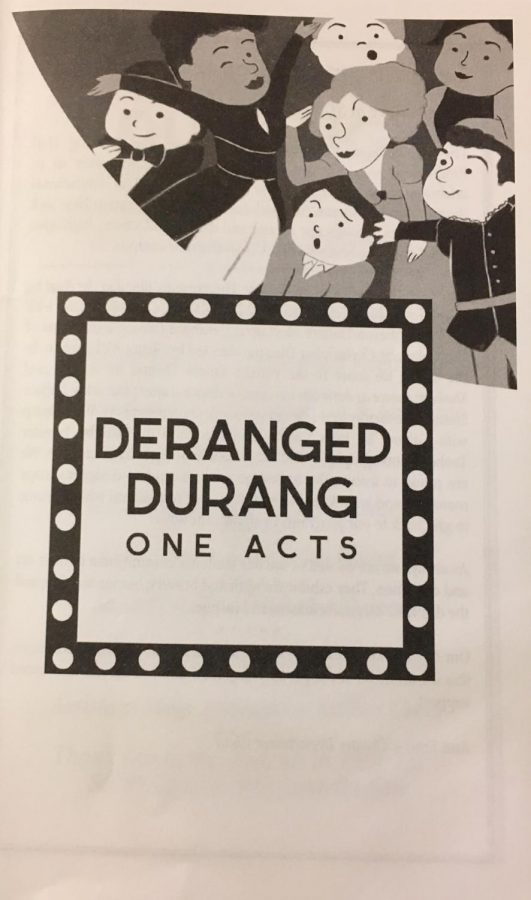 Casting Hall’s latest production has more than earned its title, even though it’s not written by anyone at Buffalo State. Deranged Durang is a series of one-act plays written by Christopher Durang. The play, directed by Shaun McLaughlin is based on comedic works despite being nauseating works that people shouldn’t have to watch.

The opening sketches, Mrs. Sorken and Funeral Parlor seem as though they are going to be funny, but really fall short of their desired goal. They have some humorous elements but just don’t seem to work. After watching Funeral Parlor, the viewer feels more like they are 911 operators listenting to a strangely calm person calling about a murder they committed.

A primary issue of the play is that there are too many references that only older members in the audience would understand. One sketch, for example, is The Hardy Boys and the Mystery of Where Babies Come From, which is a parody mystery based on The Hardy Boys novels. Even though the sketch provides a great deal of humor, the comic timing of the actors combined with the unfitting material just doesn’t work.

This sketch really sets the tone for the acting all throughout the rest of the play. Even though the actors are dedicated to the material and are trying to very hard, the comedy they are used to doing don’t work here.

One other sketch that I found to be just plain distasteful is called The Book of Leviticus. The sketch is a parody of public access shows but goes way too far. The “show” deals with a woman who is ultra-religious and decides to shoot people that go against the Bible on her show. She reads passages from the book of Leviticus that discuss how people who are adulterers and gay should be killed. So that’s what happens.

People that want to see people that use religion as a basis for murder should watch FOX News and believe that Donald Trump can actually “Make America Great Again”. Seriously, I really am unclear how this was even remotely passed off as funny to an audience, a cast member or even the director.

Following that sketch is another in a series of disasters called, Business Lunch at the Russian Tea Room, which is nothing but an annoying shot at the film industry and how people can be not caring. All in all, these sketches ruin any hope of enjoyment within a person that was aiming for a good night out.  Another part of the play that is hard to watch is Naomi in the Living Room.

In this play, a woman named Naomi is showing her son and his girlfriend her home. However, she is seemingly a borderline psychotic, and the screaming. Oh, the screaming. By the end of the sketch, you want to rip out her vocal cords. However, that annoying feeling is what the sketch is based on, but isn’t remotely in the vicinity of funny. It’s just annoying.

The final sketch, The Actor’s Nightmare proves once and for all that anyone can be an entertainer.  Based on an actor’s worst nightmare, being on stage naked without knowing what play they are doing. This part of the play takes that idea to a whole new level of terrible. This one sketch has a distrubing resemblance of the ending of the animated Walt Disney version of Alice in Wonderland, where all of the characters decide to catch her an kill her. Despite this intriguing angle, this sketch is yet another in a series of comic misfirings.

More often than not the scene is supposed to be greatly exaggerated but isn’t. It just flops much like the actor is supposed to on the stage. However, much like I stated at the beginning of the review, the play should have been modernized for the audience’s convenience. Once the play ended, I searched my pockets but couldn’t find the two hours of my life that was stolen. Many people, much like myself may not have gotten certain references, while others may not have understood why elements of The Hardy Boys sketch are supposed to be funny.

To be fair, the play’s writing is more the problem than any of the acting. Some of the directorial choices could have been different as well. The play has a minimalist idea in terms of sets, even though it is supposed to be reminiscent of sketch comedy shows. The lacking sets are just one in a myriad of problems for this play.

As someone who has seen older sketch comedy shows like The Carol Burnett Show, where a version of Funeral Parlor was performed with Robin Williams, it was funnier in that context than it was here. Why, because it was relevant to the time and the humor was much more coordinated.

Deranged Durang is a play that people should avoid because it will leave them feeling angry and frustrated by the end of it. Really, it’s similar to the comedy stylings of late comedian, Andy Kaufman, who treated the world as if it literally was a stage. After seeing this play I wish I had more hands, so I could give it four thumbs down!