Utica runs over football in 34-12 defeat 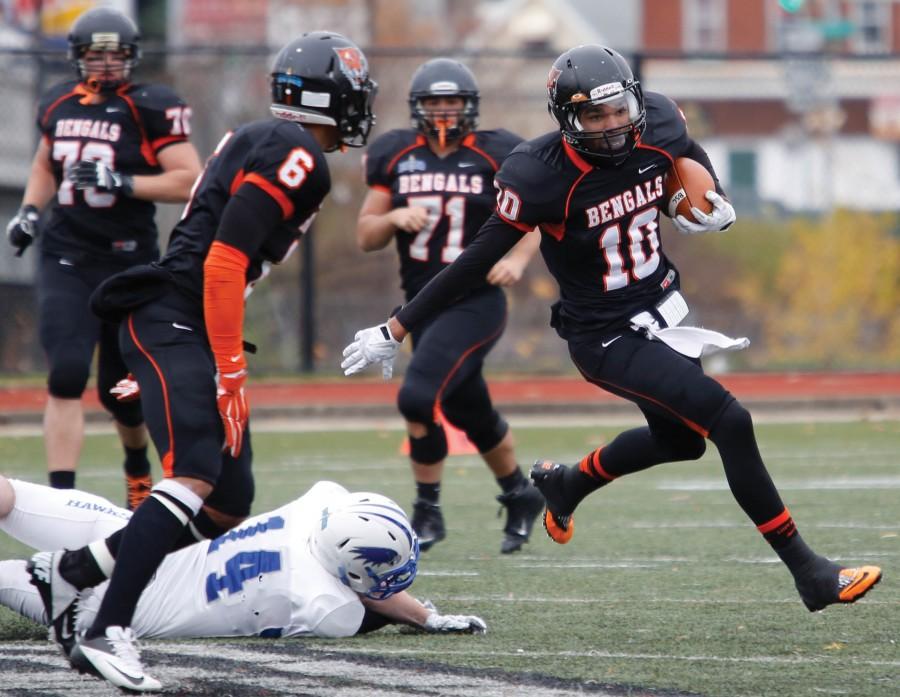 The Buffalo State football team failed to execute in all aspects of play in their 34-12 loss to the Utica Pioneers Saturday afternoon.

The Pioneers started out the day scoring on the second play of the game. Nicodemus Gambill ran the ball to the house on a 73 yard dash putting them on the board first, 7-0.

Buffalo State forced the Pioneers to a three and out but an outstanding 44-yard punt by Brandon Few pinned the Bengals in on their own 4 yard line to start off their drive.

Nick Yelich sacked Hoppy for a 3 yard loss to begin the second quarter, forcing Buffalo State to punt. Utica finished the day off with 5 sacks for 28 yards for the day.

Bart Mazzara, who was stout for the Bengals all day, was in on the tackle on two out of three plays forcing the Pioneers to a 3 and out.

Late in the first half, Buffalo State’s Trovis Clarke forced a fumble that was recovered by Justin Pender inside their own 20-yard line and as Utica was on the prowl. Due to lack of protection, the Bengals could not move the ball were forced to punt once again.

Hoppy threw a 75 yard touchdown pass to Stephen Johnson to begin the second half.

Hoppy finished 13 for 28 for 273 yards, a touchdown and was sacked five times.

Vinny Aloi completed a 23 yard pass to Alex Damiani setting up Malcom Stowe for a 9-yard touchdown run up the middle to give Utica a 20-12 lead.

Late in the third quarter Buffalo State roughed the punter and kept the Pioneers on the field which led to a Aloi 6 yard pitch and catch to Tyree Powell for a touchdown.

Aloi went 9 for 16 for 117 yards and a touchdown only being sacked once.

The Bengals continued to struggle on offence in the fourth quarter as they were forced to go three and out on their first possession. On the ensuring drive, Aloi showed off his legs with a 44-yard scramble for a touchdown for the game’s final score.

There were a whopping 26 penalties called. 16 of were against Buffalo State, costing them 185 yards. The Pioneers handed the ball off 34 times for 214 yards.

Buffalo State has suffered their third Empire 8 loss in a row and are now tied for second last place in the conference. Buffalo State will be hosting Brockport for homecoming, 12 p.m. kickoff.