Szechuan Sauce Comes Back for One Day Only 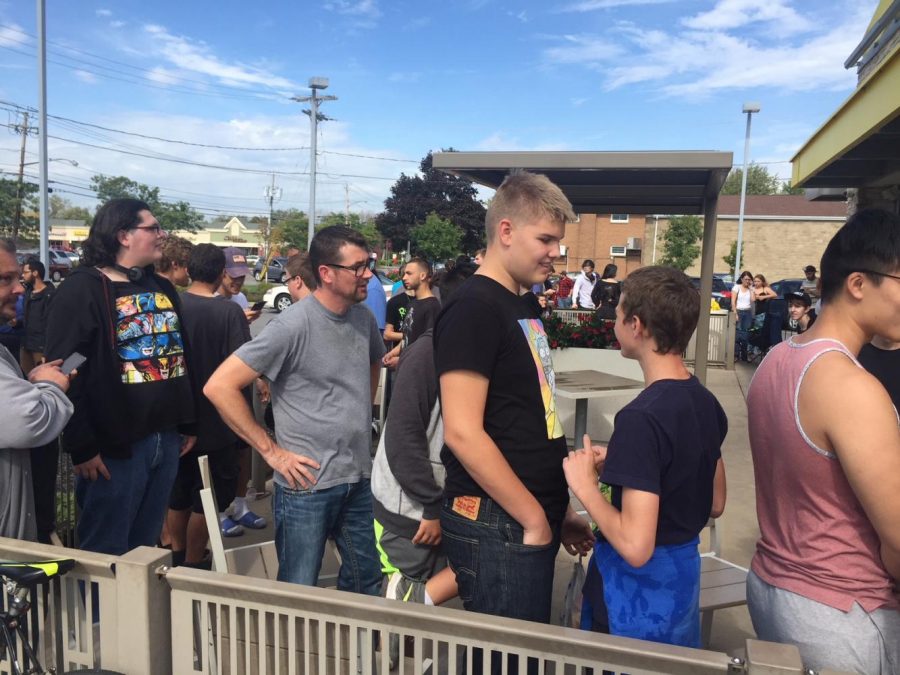 People waited in line for hours to get their hands on the Szechuan Sauce.

We did it Internet, we brought it back.

After months and months of asking McDonald’s to bring back their Szechuan sauce, the fast food company gave into our demands, well, kind of.

For one day only, which was yesterday, the company made 1,000 Szechuan sauces which were distributed to certain areas in the country. Not all locations got the sauce.

The reason behind the return of the sauce was of Rick and Morty, a popular cartoon series on Adult Swim, referencing the sauce in the show’s season three premier. In the episode, as stated in a previous article from The Record, “it is revealed that Rick Sanchez’s mission for all of his scientific antics had one goal in mind: McDonald’s Szechuan dipping sauce for promotion of the 1998 Disney film, Mulan.”

“In 1998, [McDonald’s] had this promotion for the Disney film Mulan, where they created a new sauce for the McNuggets called Szechuan sauce, and it’s delicious,” Rick Sanchez says to an intergalactic government agent.

After that episode aired on April Fool’s Day, fans of the show became curious about the forgotten sauce. McDonald’s was constantly getting bombarded on their social media accounts by fans about the sauce and finally decided to bring it back as a promotion for their new Buttermilk Crispy Tenders, which come as either a four-piece, a six-piece, or a ten-piece.

The Sweet Home location, located at 3400 Sheridan Dr., was one of the few locations in the Buffalo area to get the sauce. People from the western New York area and from places as far as Ontario and Connecticut traveled to the location. Customers who came for the sauce waited in line for hours, some even arriving to the location late Friday night. Many customers commented that they were either going to eat the sauce or sell it online for a big profit.

Siraj Kausar came from Toronto just for the sauce. He and his friends got to the Sweet Home location around 11 Friday night, camping out with chairs. “Cause were only getting one,” Kausar said, “I think we may have to try to see how much the value is. If it’s not too much then maybe I’ll consider eating it.”

Jaymin Bogal was in line since 11 o’clock and had big plans about getting the sauce. “I’m not gonna try it,” Bogal said, “I’m just gonna keep it forever if I get it. They’re like limited.”

Kenn Ijichi from Buffalo was one of the first people in line, saying that he got to McDonald’s around 8:30 in the morning. “I was expecting a big outcome, especially because [the University at Buffalo] is right next to us,” Ijichi commented.

“I feel like it’ll taste like how Morty felt when he was in the glow cloud,” Nina Grace said. She went all out for the event, dressing up as Rick with the wig to match her cosplay.

The event started at 2 p.m. local time as employees opened the doors for the Rick and Morty fans and for those who had big plans for the sauce. Only one register was opened for those who wanted the sauce, causing those in line to wait for a long time to get their hands on their sauce.

The first 50 people in line had a chance of getting the sauce, along with other gifts such as posters that showed other sauces such as sweet and sour, honey, and hot mustard, and stickers of the posters. However, not many people who were the first 50 in line got gifts. Roughly 12 sauces were at the location, upsetting those who waited in line for hours. One man left the restaurant screaming an expletive and proceeded to say “There’s no more sauce!” at the top of his lungs.

While some left either with a sauce, poster or sticker, many left empty handed. People online lashed out on McDonald’s social media accounts, lampooning them for only having stores carry roughly 20 packets of sauce. The company later apologized to their fans on Twitter, saying “The best fans in the multiverse showed us what they got today. We hear you & we’re sorry not everyone could get some super-limited Szechuan.”

However, this might not be the end for the legendary sauce. McDonald’s made a tweet yesterday reading, “For now, only a very limited amount of Szechuan Sauce exists in this dimension. But who knows where space-time will take us next?” Is McDonald’s implying that the sauce might be coming back sooner than we thought? With Disney reportedly releasing a live-action version of Mulan slated for release next year, the sauce’s third coming might be a real thing. Here’s to hoping that it’ll happen.