Joywave Rings in the New Hockey Season in Buffalo 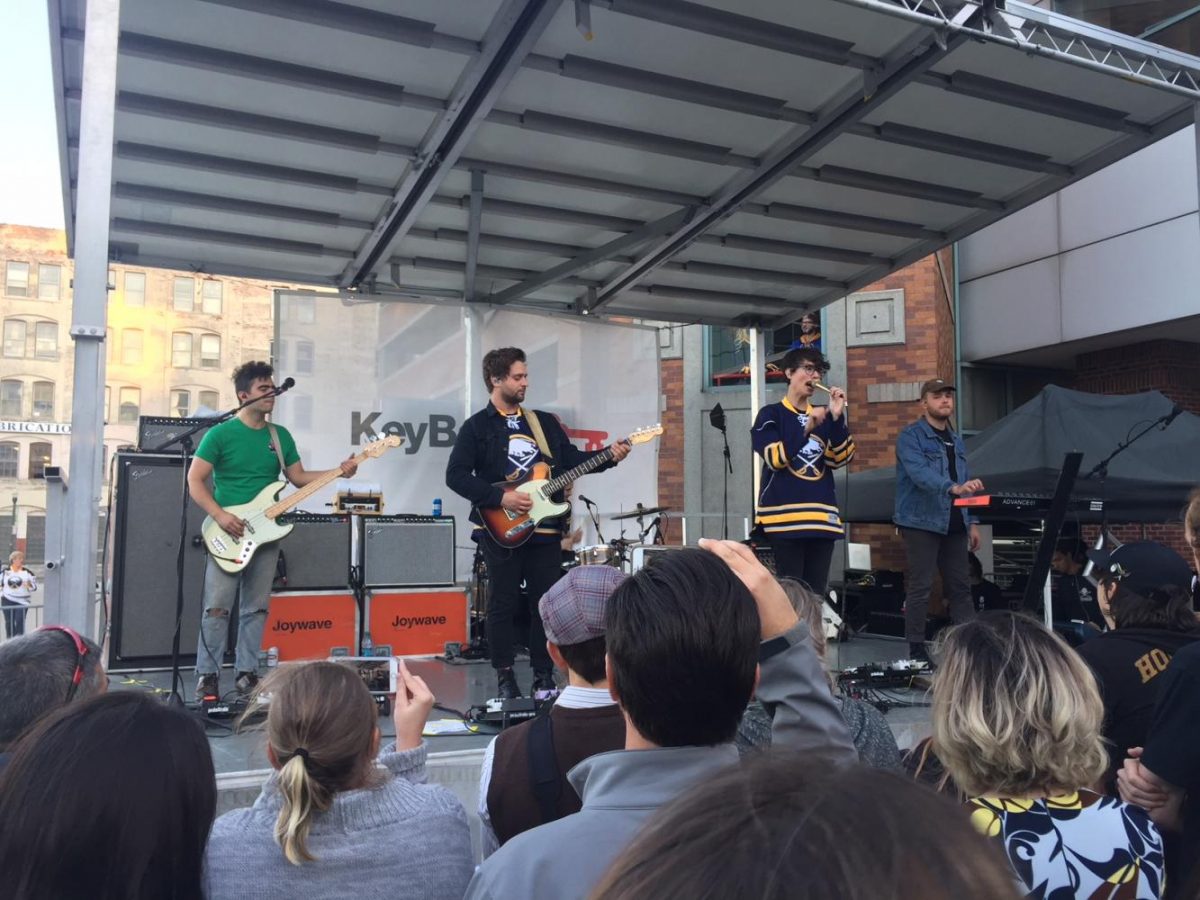 Rochester natives Joywave kicked off the new Sabres season with a free show outside the Key Bank Center.

Inside the Key Bank Center in downtown Buffalo last night, the arena was roaring from the cries of Sabres fans, but outside, people were roaring for different reasons.

Rochester based indie rock group Joywave played a free show outside the Key Bank Center right near the French Connection statue. The show sponsored by the Sabres helped kick off the new hockey season in Buffalo. It was a free show so anyone could come in and watch.

The band composed of vocalist Daniel Armbruster, guitarist Joseph Morinelli, bassist Sean Donnelly, keyboardist Benjamin Bailey, and drummer Paul Brenner, played for nearly an hour as they helped ring in the new hockey season. Forming in 2010, the band gained notable success touring with artists like The Killers, Bleachers, and Young the Giant and appearing on the popular Big Data song “Dangerous,” which came out in 2013. They are currently signed to Hollywood Records (Breaking Benjamin, Ocean Park Standoff, R5) and released their sophomore album Content back in July.

Joywave started off their set by playing their single “Now.” The band kept the audience cheering for more after each song as Donnelly worked his magic playing dirty yet smooth beats on his bass as Armbruster sang in a soft falsetto into his golden microphone. Joywave played a seven song set made up of songs from their debut album How Do You Feel Now? (“Now,” “Destruction,” “Somebody New”) and their current record Content (“Shutdown,” “It’s a Trip!,” “Little Lies You’re Told.”) They ended their set by playing their debut single “Tongues.”

You could tell that everyone was having fun, including Joywave. Armbruster and Morinelli both wore Sabres jerseys, showing their love for the team (Joywave are diehard Sabres fans.) “This is our first time opening up for a professional sports team,” Armbruster jokingly said with a smile on his face, gaining cheers from the crowd.

Even thought the Montreal Canadians won the game against the Sabres, Joywave were the real winners tonight as they easily won over the crowd by playing some amazing tunes.

Joywave will be back in the Buffalo area on Saturday, October 14, as they will be one of the many artists that are playing 103.3 the Edge’s first annual HRVST Festival at the Cumulus Festival Grounds. Other acts performing that day include French electronic pop group Phoenix, Atlanta based rock band Manchester Orchestra, the Gaslight Anthem vocalist Brian Fallon, synthpop trio PVRIS, Canadian rockers the Glorious Sons, and indie newcomers Lo Moon.